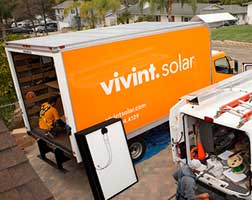 As part of its expansion plans, Vivint Solar has announced it will enter the commercial and industrial solar sectors via a US$150 million investment fund. It has also partnered with a number of EPC companies.

The U.S. residential solar installer – the second biggest in the U.S. after SolarCity, with 15% of the market – is gearing up to work on its first commercial and industrial solar projects, having entered into an $150 million investment fund. The investor was not identified.

Vivint has also established a number of partnerships with engineering, procurement and construction (EPC) companies. It has said more details will be announced on these in the near future.

“Providing more than residential solar enables us to reach additional customers and markets, and we’re excited about the potential this expansion into the commercial and industrial space brings with it,” said Jan Newman , Vice President of Business Development.

pv magazine has contacted the Utah-based company for more details.

In other Vivint news, the company has hired Greg Nielson as a principal scientist in its Solar Technology Department. The former mPower Technology employee  has spent the past year developing commercial applications from his research on microsystem enabled photovoltaics.

Vivint Solar announced at the end of 2014 its intention to open 20 new sales and operations offices across the U.S. Its first quarter results were very positive, with year-on-year revenue increasing by 172%, reaching $9.5 million, compared to $3.5 million posted in Q1 2014. For the second quarter of the year, Vivint forecasts MW installations to grow to between 63 and 67 MW, generating total revenue of $14 million to $15 million.

At the time of the announcement of its Q1 results last month, the company said it had a “commitment letter” from two investors for a new $100 million fund which, once finalized, would underpin a further solar energy installation expansion of around 63 MW, worth a market value of $285 million. Pv-magazine..com