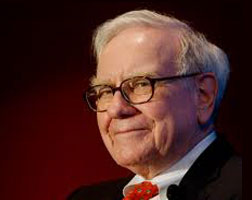 Warren Buffett has sold his entire stake in the world’s largest energy company after the price of Brent crude plummeted.

The billionaire investor sold 41.1m shares in Exxon Mobil, worth almost US$3.9bn, as well as 471,994 shares in fellow US oil giant ConocoPhillips in the last three months of 2014, filings released on Tuesday showed.

The move means Mr Buffett’s Berkshire Hathaway conglomerate no longer holds any Exxon or Conoco stock. He first bought into Exxon in the first half of 2013, and last added to it in the fourth quarter of that year.

However, he did not exit the sector completely, retaining stakes in Suncor Energy, National Oilwell Varco and Precision Castparts as of December 31.

Oil prices have collapsed from a peak of more than $115 per barrel in June to less than $50 a barrel last month. It has recovered slightly since then, trading at $62.53 on Tuesday night.

“Picking stocks is hard and getting them right all the time is impossible,” Cliff Gallant, an analyst at Nomura Holdings, told Bloomberg.

It’s not the first time Mr Buffett, who is worth US$73bn and is known as the Sage of Omaha for his stock-picking abilities, has made a bad decision in the stock market.

He lost $678m on his Tesco investment in the third quarter of 2014, Berkshire’s latest financial results showed. Mr Buffett, once Tesco’s fourth largest investor, called the holding a “huge mistake”, after the discovery of a £263m financial shortfall and a 92pc fall in first-half profits at the British retailer caused the shares to drop sharply.

Berkshire revealed net profits fell to US$4.6bn in the three months to September 30, compared with $5.1bn in the same period last year, despite strong a performance in the group’s insurance business.