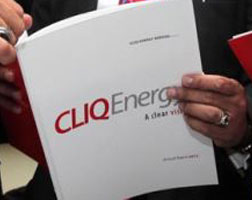 Shares in special-purpose acquisition company (SPAC) CLIQ Energy Bhd have been suspended, raising speculation that the company would likely go into an agreement to acquire an oil and gas (O&G) field.

Sources said the SPAC has been negotiating with several parties over the last two years, but has set its sights on an O&G field in Kazakhstan and is likely to call for a press conference today to announce the proposal.

“It is not likely to be a heads of agreement signing ceremony but more of a sales and purchase agreement, as CLIQ has been on the lookout for an asset for some time,” said a source.

The company said in a filing with Bursa Malaysia that its shares would be suspended from 3.38pm yesterday until 5pm today.

CLIQ told Bursa that a material announcement on a “very substantial transaction” would be made. Shares in the company were unchanged at 67.5 sen yesterday, with 3.2 million shares being done. The warrants were up by 1.5 sen to close at 19.5 sen, with 20.7 million units being traded.

The acquisition comes just over a year before it meets a deadline to acquire a qualifying asset (QA) as per SPAC guidelines issued by the Securities Commission (SC). If the QA is approved by the shareholders and the SC, the SPAC will then graduate to become a junior O&G company.

According to the SPAC guidelines, CLIQ is required to utilise a bulk of the initial public offering (IPO) proceeds for the acquisition of the QA within three years of listing. The company had raised RM364mil from a listing on the Main Market on April 10, 2013.

SPACs are known as blank cheque listings. They are companies that have no operation or income-generating business at the point of their IPO, but raise funds from a listing for the purpose of acquiring companies or assets, otherwise known as the QA.

Shares in CLIQ have picked up since January from the 62-sen level to 67.5 sen as at Monday.

It is the second SPAC to get listed after Hibiscus. There are two O&G SPACs – Sona Petroleum Bhd and Reach Energy Bhd. The companies were listed in July 2013 and August 2014 respectively.

For CLIQ, Credit Suisse had emerged as a substantial shareholder in the company with a 5.024% stake in October last year. The Swiss-based group increased its stake to 7.5% last month, but has pared down its interest to 6.636% or 41.87 million shares, according to the latest announcement.

CLIQ was earlier reported to have shortlisted some assets in Indonesia and Pakistan for its QA.

Falling oil prices spurred talk that O&G SPACs could take the opportunity to make their QAs as it could provide the SPACs better bargaining power when negotiating for oilfield assets.