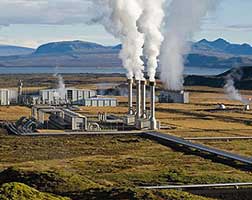 YEREVAN – The World Bank Board of Executive Directors approved on Monday an $8.55 million grant for the Geothermal Exploratory Drilling Project (GEDP) for Armenia, the World Bank said in a press release.

It said the new project is to confirm whether the geothermal resource at the Karkar field is suitable for power generation and, if confirmed, to involve the private sector in the development of a geothermal power plant.

The objective of the government is to construct a geothermal power plant at the Karkar site in the Syunik region upon the confirmation of the availability of the resource. Unlike other renewable energy technologies, such as wind, solar, and hydro, it is not possible to validate the geothermal resource with sufficient confidence for commercial development without performing exploratory drillings at depth to assess specific parameters of the geothermal field.

The selection of the Karkar site for exploratory drilling is based on field investigation works completed for two prospective sites, which were deemed the most promising by the local and international geothermal experts. The field investigation works at the prospective sites were supported under the Armenia Geothermal Project, financed by the Global Environmental Facility (GEF) and completed in 2012.

“By investing in exploration that can lead to the first commercial project, we can help build domestic capacity for the development of additional geothermal resources at other prospective sites. The total potential for geothermal power in Armenia is currently estimated at around 150 megawatt,” said Laura E. Bailey, World Bank Country Manager for Armenia.

“A successful project of this type will also strengthen the investor confidence that geothermal is a viable and profitable investment opportunity in the country.”

The government will use Scaling-up Renewable Energy Program (SREP) resources for Stage 1 of the Karkar geothermal project to carry out the exploratory drilling and, if the resource is confirmed, to assess the feasibility of a geothermal power plant at Karkar and support involvement of the private sector for the full development of the geothermal power project.

The development of geothermal power would contribute to the reduction of greenhouse gas emissions.

“If adequate geothermal resources are confirmed, then future construction of a geothermal power plant would help the Government to meet the forecasted electricity demand and improve the energy security and independence of the country,” said Arthur Kochnakyan, World Bank Task Team Leader of the Project. “Low-cost electricity from a potential geothermal plant can help keep the electricity affordable for the poor.”

The R2E2 Fund will implement the project since it has the required capacity and experience in implementing Bank financed projects. The Fund is a non-profit organization established by the Government in 2005 with the mandate to promote the development of renewable energy and energy efficiency markets in Armenia and to facilitate investments in these sectors.

The Scaling up Renewable Energy Program in Low Income Countries is a targeted program of the Strategic Climate Fund (SCF), which is one of two funds within the framework of the Climate Investment Funds (CIF).

The SREP was established to scale up the deployment of renewable energy solutions and expand renewable markets in the world’s poorest countries. It aims to pilot and demonstrate the economic, social, and environmental viability of low carbon development pathways. SREP financing supports technologies such as solar, wind, bio-energy, geothermal, and small hydro technologies. It stimulates economic growth by working with governments to build renewable energy markets, engage the private sector and explore productive energy use.

Last year the Sub-committee of the SREP has approved $40 million Investment Plan (IP) for Armenia comprised of around $14 million of grants and $26 million of very concessional credits. The $ 40 million of SREP funding is expected to catalyze roughly 4.5 times as much investment, most of it from the private sector (as equity or debt), and the commercial lending windows of the Multilateral Development Banks (MDBs) including IFC, ADB, EBRD. – asbarez.com