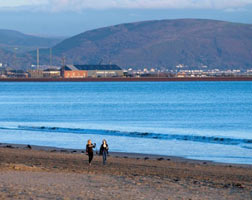 An ambitious project to build the world’s first tidal lagoon for generating clean electricity off the coast of Swansea has triggered an environmental row on the south coast of Cornwall.

And a second row is brewing, with a Chinese construction group in pole position to win a huge contract to undertake marine works at Swansea Bay, despite key promises by the developers to prioritise local involvement.

The Cornish dispute centres on a project to reopen a quarry at Dean near St Kevergne on the Lizard Peninsula, to source at least 3m tonnes of stone for the Swansea project.

Many residents in Dean and St Kevergne, some ocean scientists and all the local candidates in May’s general election oppose the quarry scheme. The Cornish stone would be used to build a six-mile long breakwater in Swansea amid hopes of generating significant shipping volumes in a newly-created marine conservation zone.

The quarry project in Cornwall is being proposed by Shire Oak Quarries, a company headed by Mark Shorrock, the chief executive of Tidal Lagoon Power, which is developing the Welsh energy scheme.

A Cornwall Against Dean Super Quarry campaign has been set up and Gabriel Yvon-Durocher, senior lecturer in natural environment at the University of Exeter, said the project was “the first real test of what it means to be a Marine Conservation Zone, but will also be under intense scrutiny from conservation groups and the marine science community.”

In a statement, Tidal Lagoon Power said it would soon appoint a marine works contractor to source and transport rock to the project but denied a decision had been taken to source materials from Cornwall:

“No decisions have been taken with regards rock supply. Sustainability is designed into the core of the lagoon and we are no less demanding of our supply chain.”

The developer is expected to award the marine works contract within the next couple of weeks and the project could obtain planning permission as soon as 10 June.

The British company Laing O’Rourke has just been made preferred bidder for a £200m deal to build a 410-metre turbine house and sluice gate structure for the project, which will create 500 jobs.

But the three other companies on the shortlist, with the Chinese frontrunner, to undertake the marine works on the Welsh scheme are foreign, while a major turbine contract has already gone to GE of the US and Andritz Hydro of Austria.

Tidal Lagoon Power said it was confident it would meet all its targets:

“We are resolute in our commitment to deliver a project that maximises long-term employment and investment in the UK. Judge us on our record to date: our turbines will be assembled at a new facility in Wales from a majority of British parts, housed in a structure built by one of the biggest names in UK infrastructure.”

Swansea Bay is aiming to generate 500 gigawatt hours of electricity a year – enough for light and power for 120,000 homes – with turbines working 14 hours a day.

Key to the wider £1 bn scheme going ahead are negotiations currently underway with the Department of Energy and Climate Change over the level of renewable power subsidy to be made available under the Contracts for Differencemechanism.

The government has reiterated its commitment to tidal power, while the Sunday Telegraph reported that ministers planned to bring an early end to subsidies for onshore wind farms, triggering an angry response from the industry.

Ian Marchant, former boss of Scottish and Southern Energy and a spokesman for the British Wind campaign group, said:

“If implemented, the government will be compelled to find much more expensive alternative sources of renewable energy to onshore wind, which is by far the lowest cost renewable energy available at scale today in the UK.” – The Guardian