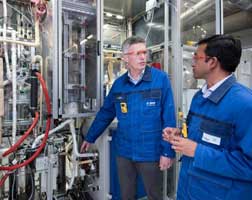 The production processes of the most important basic chemicals are responsible for around 70% of the greenhouse gas emissions in the chemical industry. German chemical firm BASF says its experts are working intensely on new technologies to substantially reduce emissions in these processes. The company has bundled all of this work under the roof of its ambitious Carbon Management Program. One of the first visible successes in this area has been achieved by a project team which has applied to patent a process to produce methanol without any greenhouse gas emissions. If it can be successfully implemented at an industrial scale, the entire production process – from syngas production to pure methanol – will no longer release any carbon dioxide emissions.

Typically, methanol is made from syngas, which until now has been primarily obtained from natural gas via a combination of steam and autothermal reforming. Using special catalysts, this can then be turned into crude methanol, which can be further processed after purification. In the new BASF process, the syngas is generated by partial oxidation of natural gas, which does not cause any carbon dioxide emissions and has proven to be advantageous in a study jointly conducted with Linde Engineering. The subsequent process steps – methanol synthesis and distillation – can be carried out nearly unchanged.

Ingenuity was required to address the merging and processing of the waste gas streams that arise during methanol synthesis and distillation and which cannot be avoided even with optimal process management.

These waste gas streams consisting of methane, carbon monoxide, carbon dioxide and hydrogen are incinerated in an Oxyfuel process with pure oxygen. This results in a small volume of flue gas with a maximum carbon dioxide content. The flue gas is then scrubbed using BASF’s OASE process for full recovery of the carbon dioxide. To ensure that the carbon contained in the carbon dioxide is not lost and that it can be used again for methanol synthesis, the captured carbon dioxide is fed back into the beginning of the process. This does, however, require additional hydrogen, which BASF also aims to produce without any carbon dioxide emissions, for example, via methane pyrolysis, which is also being developed in the Carbon Management research program.

“We are optimistic that our climate-friendly approach will better adapt methanol synthesis to the requirements of the 21st century,” said project manager Dr. Maximilian Vicari from BASF’s Intermediates division. “Nearly 100 years after the first industrial-scale production of this important basic chemical using BASF’s high-pressure process, we are now taking a leading role in writing the newest chapter in the history of methanol.” Vicari expects it will be around ten years before this new process is carried out in an industrial-scale plant.

The basic chemical methanol is an important starting material for many products in different BASF value chains. Derived products such as formaldehyde, acetic acid and methylamines are very important in terms of volume. Other important derivatives include methyl tert-butyl ether, methyl methacrylate, polyalcohols and silicones. Methanol also serves as an energy supplier and can be used as a raw material for chemical conversion into other fuels or fuel additives.