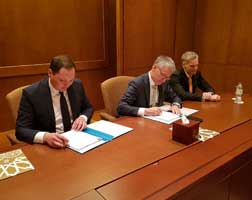 Borealis and United Chemical Company LLP (UCC) have signed a Joint Development Agreement (JDA) for the development of a world-scale polyethylene project, integrated with an ethane cracker, in the Republic of Kazakhstan.

Simultaneously, a government support agreement was signed between the two companies and Samruk-Kazyna Chief Executive Akhmetzhan Yessimov as well as the government of the Republic of Kazakhstan, represented by the Minister of Energy, Kanat Bozumbayev. A Memorandum of Understanding (MoU) was also signed to cooperate on a 500 kilotonne/year polypropylene project that is currently being implemented by Samruk-Kazyna Sovereign Wealth Fund and is under construction. The agreements were ceremoniously signed in Abu Dhabi on 24 March 2018 by the Ministers of Energy of Kazakhstan and of the UAE, in the presence of the President of Kazakhstan, Nursultan Nazarbayev and the Crown Prince of Abu Dhabi, Mohammed bin Zayed bin Sultan Al-Nahyan.

The scope of the JDA will include the construction of an ethane cracker and 2 Borstar PE units, with a total capacity of 1,250 kilotonne/year and with a pre-investment in the cracker for future expansion. The final investment decision on the project is expected to be taken in 2020 and start-up would be scheduled for 2025.

Through this strategic partnership, Borealis and UCC are exploring the opportunities of jointly developing the Kazakhstan polyolefin industry.

In other news, Borealis and its subsidiary company Borouge have inaugurated a newly expanded high voltage (HV) electrical testing facilities at the Borealis Innovation Centre in Stenungsund, Sweden. EUR4 million has been invested in order to expand and equip the facility with cutting-edge testing equipment, say the companies.

The wire and cable laboratories in Stenungsund have been important development centres for cable insulation products since 1970, when the first Cross-linked polyethylene (XLPE) cable insulation products were produced at the Stenungsund plant. The scope of testing activities has been expanding steadily over decades, starting with testing on electrical cables and cable extrusion lines in 1986. In 2009, a new three-layer Continous Vulcanisation (CV) extrusion line was installed. The completion of this most recent two-year investment project in electrical testing now significantly expands the range of testing activities.

The newly enhanced Stenungsund HV testing centre offers alternate current (AC) and direct current (DC) simulation testing for the performance of commercial cable materials in the medium (MV), high (HV), and extra high voltage (EHV) ranges. When developing innovative new materials, testing is crucial to help ensure material safety and promote quality assurance. Within the framework of customer and value-chain cooperation, the HV testing centre can also open up an entire spectrum of new project types, and can accelerate the time to market for new innovations.

Increased demand for electricity, growing urbanisation, the efficient supply of energy from renewable sources, and the interconnectivity of power grids are just a few of the trends driving the wire and cable industry. To meet and even anticipate these trends, Borealis and Borouge say they continue to invest in research and development and testing to deliver step-change solutions based on proprietary technologies.

With transmission technology to ensure the efficient connection of remote, clean energy sources to the grid, Borealis says it has built on its years of operational experience in extruded HVDC materials and its proprietary Borlink technology, setting a new world record of 640 kilovolt (kV) for extruded HVDC cable technology in 2017. The tailor-made Borlink compounds used for these cables are produced in Stenungsund.