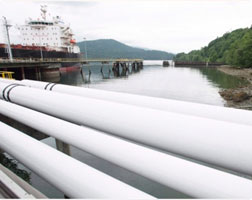 The National Energy Board on Thursday has set out a mechanism for resolving permit disputes related to Kinder Morgan Canada’s Trans Mountain pipeline expansion project, which has faced repeated delays due to difficulty in obtaining permits.

The regulator said that under the new process it will consider future disputes between the company and provincial and municipal authorities, and provide a response within three to five weeks, providing a “measure of certainty” for all parties.

The announcement came a day after Kinder Morgan Canada, a division of Houston-based Kinder Morgan Inc, said the start-up of the expanded pipeline would be delayed until December 2020 due to permitting struggles.

Kinder Morgan said late on Thursday it was pleased with the NEB’s decision, adding it was committed to work with local authorities and would review the decision in more detail.

The Trans Mountain expansion, which would nearly triple capacity to 890,000 barrels per day, is hotly opposed by environmental groups, the province of British Columbia, and some local municipalities, including the Vancouver suburb of Burnaby, where the pipeline ends.

While the project has federal approvals, Burnaby last year refused to issue key construction permits, forcing Kinder Morgan to appeal to the NEB for permission to proceed with its work. The company won that appeal in December.

The NEB said it hopes the new process, which was requested by Kinder Morgan, will be used sparingly and that all participants will approach future permitting on a good faith basis, noting that the company must comply with all local laws.

Separately, the NEB said it will hold hearings in Burnaby starting next week on the final route of the expansion, which is a twinning of an existing line from Alberta’s energy heartland to the British Columbia coast.