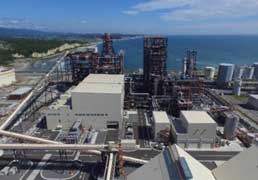 A consortium led by Mitsubishi Heavy Industries, Ltd. (MHI)1 has completed construction of an integrated coal gasification combined cycle (IGCC) plant in the town of Hirono, in Fukushima Prefecture’s Futaba District, and the new plant was formally handed over to the customer, Hirono IGCC Power GK.

Operation of the new facility, which is said to be a clean commercial power plant incorporating the advanced coal gasification technologies, got underway in November. The project called for creation of one of the world’s largest IGCC configurations, roughly twice the scale of the previously completed Nakoso Unit 10 (former IGCC demonstration plant). The new facility is the second IGCC plant of such large scale in commercial use, following the installation constructed for Nakoso IGCC Power GK that went into operation in Fukushima Prefecture’s Iwaki City this past April.

The Hirono IGCC plant adopts a high-efficiency gas turbine combined cycle (GTCC) system integrating gas and steam turbines. Coal is gasified in a gasification furnace at high temperature under high pressure; sulphur, ash and the like are separated out and removed; and the refined gas is used as fuel to drive the gas turbine.

Combusted waste gas is fed to a waste heat recovery boiler, and the generated steam is used to operate the steam turbine. Power generation efficiency is 48%. This is higher than with conventional coal-fired power generation, contributes to reduction of carbon emissions.

The IGCC plant construction project undertaken by Hirono IGCC Power GK incorporates the hopes and expectations of all stakeholders that the new plant, featuring the world’s most advanced thermal power generation technologies, will contribute to the creation of the local industrial infrastructure, and thereby to Fukushima’s regional recovery.

Through its participation in this IGCC project and the resulting adoption of another next-generation high-efficiency power generation system, MHI has made a significant contribution to the effective use of resources, to environmental protection, and to revitalisation of the Fukushima region.