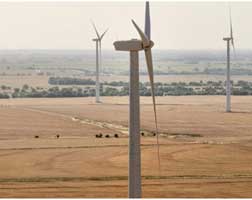 The wind facility, which is owned by EGPNA subsidiary Red Dirt Wind Project, LLC, will be located in Kingfisher and Logan Counties, Oklahoma. Once completed, Red Dirt will be able to generate approximately 1,200 gigawatt-hours (GWh) of renewable energy annually – equivalent to the energy consumption needs of more than 97,000 US households – while avoiding the emission of about 860,000 tons of CO2 each year.

As a part of Enel’s current strategic plan, the company has invested around US$420 million in the construction of the Red Dirt wind farm. The investment is financed through the Enel Group’s own resources.

The energy and renewable energy credits from Red Dirt, which is expected to enter into service by the end of 2017, will be sold under two long-term agreements, one with T-Mobile US, Inc. for 160 MW and the other with the Grand River Dam Authority for 140 MW of the wind facility.

Since EGPNA entered the Oklahoma wind market in 2012, the company has experienced a near ten-fold increase in capacity in the state, increasing its wind portfolio to now nearly 1,500 MW from 150 MW. EGPNA’s other projects in Oklahoma include the 150 MW Rocky Ridge in Kiowa and Washita Counties, 300 MW Chisholm View I and II in Grant and Garfield Counties, 150 MW Origin in Murray, Carter, and Garvin Counties, 150 MW Osage Wind in Osage County, 200 MW Goodwell in Texas County, 74 MW Little Elk in Kiowa and Washita Counties, and 108 MW Drift Sand in Grady County.

EGPNA, part of the Renewable Energies division of the Enel Group, is a leading owner and operator of renewable energy plants in North America with plants operating and under development in 23 US states and two Canadian provinces. EGPNA operates around 100 plants with a managed capacity exceeding 3.2 GW powered by renewable hydropower, wind, geothermal and solar energy.