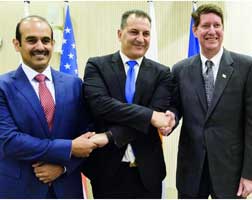 American multinational oil and gas corporation ExxonMobil and state-owned Qatar Petroleum have signed an oil and gas deal with the Cyprus government for production and exploration offshore Block 10 in the Mediterranean Sea.

The Qatar Petroleum and ExxonMobil consortium partners are planning to commence drilling for oil and gas offshore Block 10 in 2018. As part of this effort, the partners have already commenced a 3D seismic survey.

Qatar Petroleum president and CEO Saad Sherida Al-Kaabi said: “This agreement expands our international upstream footprint into the eastern Mediterranean for what we hope is one of the most promising opportunities in the area.”

The agreement comes after the completion of bidding round under the third licensing round to explore for potential hydrocarbon reserves in block 10 off the coast of Cyprus.

Cyprus Energy Minister George Lakkotrypis was reported as saying that the country’s third licensing round was aimed at advancing the exploration for hydrocarbons potential at its exclusive economic zone.

Lakkotrypis said that exploration and production sharing contracts are due to be signed by Italy’s Eni and France’s Total for block 6, and by Eni for block 8 in near future.

ExxonMobil senior vice-president Andrew Swiger said: “We look forward to working with the government of Cyprus to evaluate and realize the country’s hydrocarbon potential.”