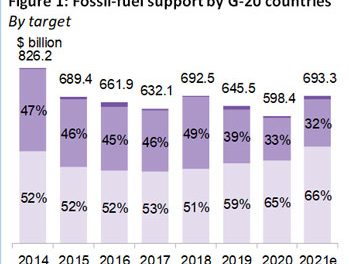 The 19 individual country members of the G-20 provided US$693 billion in fossil-fuel support in 2021, thereby slowing down progress on reaching the goals of the Paris Agreement, according to a new report released by Bloomberg Philanthropies and BloombergNEF (BNEF). This quite substantial sum distorted prices, encouraged potentially wasteful use and production of fossil fuels, and resulted in investment in long-lived, emission-intensive equipment and infrastructure.

The Climate Policy Factbook evaluates the progress made by each G-20 nation in three concrete policy areas: 1) phasing out support for fossil fuels, 2) putting a price on emissions, and 3) enforcing climate-risk disclosure. The report aims to increase transparency and inform policy priorities ahead of the G-20 Summit in Indonesia and COP27 climate conference in Egypt, where much of the discussion will focus on how to realize the many pledges and targets announced at COP26 in Glasgow a year ago.

Michael R. Bloomberg, UN Secretary-General’s Special Envoy on Climate Ambition and Solutions and founder of Bloomberg LP and Bloomberg Philanthropies, said: “Governments continue to subsidise fossil fuels – undermining the pledges they’ve made, harming public health, and shrinking our chances of avoiding the worst impacts of climate change. We need to dramatically speed up the shift to clean energy and away from coal and other fossil fuels, and this report highlights some of the most important steps governments can take.”

The share of G-20 fossil-fuel support allocated to coal is slowly shrinking – from 4.1% in 2016, to 2.9% in 2021. But coal still attracted a total of $20 billion of government support in 2021. This is surprising given that much of the effort to phase out fossil-fuel support has focused on coal, including pledges announced at recent G-20 summits and COP26.

While 2021 estimates are provisional, they suggest fossil support spending surged 16%. This spike was not simply due to economic recovery and higher energy use as 2021’s total was 5% higher than 2016, a year in which energy use was approximately level. In fact, the 2021 increase was driven by a 16% increase in support to fossil-fuel producers and utilities.

“The G-20 and G-7 governments have announced a range of seemingly more ambitious commitments to phase out fossil-fuel subsidies,” said Victoria Cuming, head of global policy at BloombergNEF and lead author of the factbook.“But they always seem to include imprecise language and caveats, giving governments wiggle room to interpret these pledges as they wish. BNEF’s analysis shows that there seems to be little evidence of those countries delivering on their promises.”

To effectively lead the phaseout of coal and other fossil fuels, G-20 countries must introduce a meaningful carbon price, so that companies and consumers pay for their greenhouse-gas emissions. In total, 12 member countries of G-20 have nationwide carbon pricing. Europe and Canada remain G-20 leaders for robust carbon policies. In particular, prices are close to or far above the level needed to limit global warming to 2C above pre-industrial levels by the end of the century. The World Bank estimates this range to be US$40-80 per metric ton by 2020 and US$50-100 by 2030. The other G-20 countries with nationwide schemes have an average carbon price of US$8/ton and the US, which has several state-level programs, has an average price of US$9/ton. Most of these programs are less effective as they cover such a small share of national emissions or offer concessions that are too generous to participants.

The third priority area is to enforce climate-risk disclosure by companies and financial institutions. Policymakers are more loudly than ever voicing concern that climate change poses major risks to financial stability. However, out of the G-20 countries, only the EU and UK have passed laws or regulations to mandate specific, nationwide climate-risk disclosure for investors, while the US has issued a proposal to take this step. Instead, most G-20 governments have only gone as far as launching pilot projects and issuing voluntary guidance documents. These may mark a change in rhetoric and help improve financial market participants’ capabilities without being too disruptive for current market practices. But this type of voluntary approach allows institutions to delay action. ​