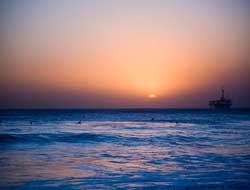 In a move that marks the key opening of Mexico’s energy sector, some of the world’s best-known oil companies are set to compete in a long-awaited auction for deepwater contracts in the Gulf of Mexico, which have been off-limits to private investment for nearly eight decades.

Mexico is auctioning off four blocks in the Perdido Fold Belt, located some 320km south of Texas, that show geological similarities to the US side and are close to important pipeline infrastructure. Another six larger blocks are on offer in the largely unexplored Salina Basin in the south of the Gulf of Mexico.

Some of the bidders who are expected to compete include ExxonMobil, BP, Royal Dutch Shell and Chevron and China’s Cnooc.

The auctions will also be the first big test of investment appetite in Mexico since Donald Trump won in the US election with populist pledges including renegotiating the North American Free Trade Agreement (NAFTA).

Trump’sNAFTA pledge could, if realized, bump up exploration costs in Mexico if imports of heavy equipment needed for drilling were subjected to tariffs.

Mexico has been opening up its energy sector to private investment under a sweeping reform program and has already tendered shallow-water and onshore blocks in recent months. But the deepwater contracts that will be awarded are considered the crown jewels of the auction process so far because of the prospects for big discoveries.

Whereas the US side of the Gulf is crowded with rigs and accounts for 17% of US crude production, the Mexican side is still largely a blank slate.

In addition, companies can also bid to partner with Pemex, Mexico’s financially troubled state oil company, in the deepwater Trion field, the first joint venture in the company’s 78-year history.

Pemex is teaming up with Chevron and Japan’s Inpex, and has also qualified to bid individually. The National Hydrocarbons Commission (CNH), which is running the tender, has not said which blocks companies are bidding for.

Pedro Joaquín Coldwell, Mexico’s energy minister, said success would be to award four of the 10 fields, which would not start producing for a decade if oil is found.

While prospective bidders have applauded Mexico for making extensive seismic data available, that data showed the opportunities “are not as obvious as many companies thought”, said a senior official at one international company planning to bid.

Pemex is hoping that the 60% Trion stake will bring in a total of US$11billion in investment.

With oil companies’ cash flows squeezed, the auctions come “in a very difficult pricing environment”, albeit “the sector is seeing light at the end of the tunnel”, said an executive at one company that is preparing a bid.

“Most of the ones that pulled out are midsized — they’re the ones that are struggling [in this price environment]. This is going to be a cash flow game,” said a senior official at a major that will take part.

Initially, 26 bidders, between consortiums and individual companies, had pre-qualified for the Perdido and Salina blocks and 10 had lined up for Trion, but a raft of companies, including Noble Energy of the US and Japan’s Mitsubishi Corp., India’s ONGC Videsh, Petrobras of Brazil, PetroCanada and Galp of Portugal, have dropped out.