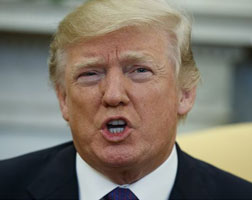 According to new IHS Markit analysis, escalations in the trade dispute between China and the US have driven both countries to respond with tariffs. This could derail a global economic boom that has benefited the global petrochemical industry, which has enjoyed significant profitability across many sectors.

The US industry, in particular, has experienced a renaissance in productivity and profitability due to its abundant supply of advantaged shale gas feedstocks, which has enabled the industry to invest significantly in capacity and new production, much of which is intended for export to feed hungry Asian and Chinese markets.

While the US represents a country with many resources, including available investment capital, low-cost energy and feedstocks, as well as chemical technology, China represents the primary hub for future chemicals demand growth as it seeks to back-integrate within various value-chains to maintain an acceptable level of self-sufficiency in base chemicals. China requires these basic chemicals, which serve as the building blocks used in the manufacturing of durable and non-durable consumer goods. These consumer goods are manufactured in China and are sold all over the world, and increasingly are consumed domestically, as China’s urbanization levels continue to rise.

Trade between the US and China is a key and essential connection between the two countries. In 2017, the US imported US$505 billion in goods from China, and China imported US$130 billion in goods from the US. The trade deficit of US$375 billion was one of the key issues raised by the 2016 Trump presidential campaign, and now President Trump has made trade with China a major issue in 2018, with numerous tariffs imposed across many business sectors. The Chinese have quickly responded in kind, with more tariffs on US imports, many of which take aim at the petrochemical and plastics sectors.

On March 22, 2018, based on the United States Trade Representatives’ (USTR) Section 201 investigation into China’s alleged intellectual property rights violations, the US intends to impose a 25 % tariff on US$60 billion worth of imports from China. China responded within hours of the US announcement with a tariff plan of its own.

China outlined a tariff plan on imports from the US to be carried out in two phases, covering 128 products that total approximately US$3 billion. On April 4, 2018, China announced additional retaliatory tariffs on US products. The announcement included a proposal to impose up to 25 % additional tariff on US exports of 106 products worth about US$50 billion per year, including several key petrochemical and plastics products,  such as propane, a natural gas liquid and key chemical feedstock, as well as the polyethylene and vinyls (plastics) value chains.

As of April 6, 2018, the IHS Markit Chemical Week team reported President Trump has requested tariffs on an additional US$100 billion of Chinese exports, further escalating the trade dispute between the US and China. As note previously, one of the significant risks to our IHS Markit forecast for an extended upcycle of profitability in the global chemical industry is the threat of an all-out trade war between the US and China that would also envelop our key allies. As of today, it appears that the probability of that threat has again increased.

While the trade of energy and chemicals represent a small portion of the total trade between the two countries, within a given petrochemical value-chain, the impact of a trade war could be significant. Most notably, we expect impacts to be experienced in the propane, polyethylene (PE), which is the world’s most used plastic, and the vinyls (EDC and PVC) value chains.

Regardless of any Chinese tariffs in place, US propane production will likely continue to increase, since LPG (liquefied petroleum gas or propane) is produced as a by-product of refining and natural gas processing. In the near-term, Mont Belvieu (Texas) propane prices (the US benchmark) could face downward pressure if China reduces import volumes from the US In 2017, the US exported 3.4 million metric tons to China of propane, according to IHS Markit.

While the additional propane volumes produced in the US could be used as olefins cracker feedstock, this will not be enough to offset the ‘lost’ volumes to China, therefore US LPG volumes will need to be exported to an alternate market location.

Unlike ethane, propane is a much more liquid market and fungible. The expectation is that the China tariff will result in a propane trade rebalancing. For example, Northeast Asia currently takes heavy volumes of LPG from both the US and the Middle East. The market reshuffle is likely to result in Japan and Korea taking more LPG from the US, while China will take more LPG from the Middle East, to adapt to the situation.

Of course, there are likely some constraints in the near-term, due to term-contract obligations and other considerations. Further, we at IHS Markit expect price signals to incentivize such a rebalancing act. For example, the US/Asia arbitrage will likely increase for Japan and Korea, whose traders will view US propane as an attractive sourcing option. With that said, the arbitrage is not expected to increase the level of Japanese and Korean demand for US propane that the 25 % tariff increase would require to offset the lost demand from China.

In summary, the global propane market is efficient enough to find a ‘new norm’ if the proposed tariffs are implemented. There are likely to be short-term inefficiencies before achieving a ‘steady state new norm’ caused by short-term contractual obligations and the allowance of enough time for pricing signals to incentivise the global rebalancing of the market.

The additional retaliatory tariffs announced by China for US products includes certain grades of polyethylene. While certain PE products were identified in the tariff announcements, there are still many unknowns that make estimating the impacts more challenging—the timing of the implementation of announced tariffs is unclear, and there is uncertainty as to whether or not the list of affected products will be expanded.

According to the trade codes released in the official document, PE products impacted include HS code 39011000, 39014090 and 39019090. Trade code 39011000 covers mainly low-density polyethylene products, and in 2017, China reported 155 thousand metric tons of imports from the US under this HS code. Trade code 39014090 refers to metallocene LLDPE (linear low-density polyethylene), a specialty grade of LLDPE. In 2017, China imported slightly more than 20 thousand metric tons of products from the US under this code.

Finally, 39019090 refers to polyolefin elastomer and polyolefin plastomer, which are non-commodity grades of polyethylene. Approximately 54 thousand metric tons of these products were exported from the US to China in 2017, under the 39019090 code. To summarize, LDPE is the major PE grade impacted by the announcement, LLDPE is limited to non-commodity grades, while high-density polyethylene (HDPE) will not be affected by the current tariffs.

China is a major importer of all three resin types, with HDPE and LLDPE, in particular, being in tight supply, so it is understandable why HDPE and commodity LLDPE may have been excluded from the list. Currently, China is about 60 % self-sufficient in terms of overall PE consumption. In 2017, total US PE exports to China were just under one million tons, with exports to China representing about 17 % of the total PE exports from the US The majority of PE exports from the US to China have historically been associated with HDPE, while LDPE exports represented about 14 % of the total US PE export to China.

If the tariffs go through as proposed, we are likely to see some producers optimize their global footprint by exporting more products from the US to Europe, while supplying China from their Middle East or Asia-based facilities. No doubt some shuffling will occur and trade will rebalance.

We at IHS Markit expect minimal impact on US prices unless this situation lasts into 2019 and beyond, when new LDPE capacity is expected to come online. We at IHS Markit expect more than one million metric tons of new LDPE capacity to start up by the end of 2019, including projects from Dow, Formosa and Sasol. Most of the production from this new LDPE capacity had been targeted to the export market (China) and some may be redirected to the domestic (US) market. If tariffs are implemented, it could create increased competition for market share in the US, thereby impacting LDPE prices and margins.

The US exports between 300,000 metric tons and 350,000 metric tons of ethylene dichloride (EDC) to China annually, virtually all of which is consumed for PVC (polyvinyl chloride) and solvents production. Exports to China account for about two % of US EDC production and about 24 % of US EDC exports. Chinese EDC capacity is insufficient to make up the deficit if imported EDC in that quantity were to cease. 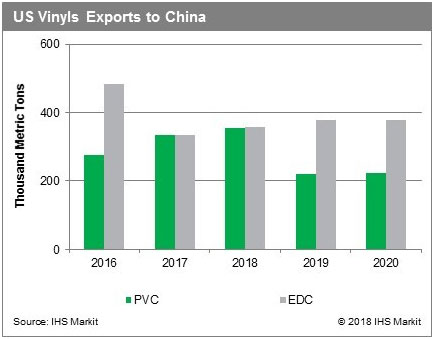 Because US EDC producers have limited alternative destinations for EDC exports displaced from China, IHS Markit projects that US operating rates for EDC would be reduced to avoid excess product in the domestic (US) or contract export markets. Reduced EDC operating rates would necessitate reduction in US chlor-alkali operating rates by one % to 1.5 % at plants integrated to EDC exporting facilities. The reduction in chlor-alkali rates would, in turn, reduce caustic soda production. Caustic soda trade flows would shift as Middle East caustic soda production rises concurrent to the decrease in US production, offsetting any expected impact on caustic prices as a result of the EDC tariff.

The US exports approximately 300,000 metric tons of polyvinyl chloride (PVC) to China annually. PVC exports to China account for approximately four % of US PVC production and approximately 11 % of US PVC exports. In contrast to EDC, Chinese PVC operating rates could be increased to supply an equivalent amount of PVC to the domestic market with no imports from the US However, IHS Markit estimates that the cost to produce the incremental PVC production in China would be approximately five % to 10 % higher than US imported PVC prices before the imposition of the 25 % tariff. Therefore, we at IHS Markit believe that rates would be increased at acetylene carbide (AC) PVC plants in China to compensate, rather than importing more expensive PVC from the US

A side effect of the increased AC PVC operating rates in China would be an increase of about 200,000 metric tons of caustic soda production in China on an annual basis. Due to the location of AC PVC plants in China, and the relatively small amount of caustic soda co-product production, we at IHS Markit do not think the additional caustic soda production would materially impact global caustic soda prices. (Note: our assessment of potential impacts due to tariffs on PVC exports from the US to China is independent of the assessment regarding whether duty drawback provisions exist and would potentially mitigate the impact of PVC tariffs if PVC is being imported into China and used to fabricate end-products that are re-exported.).

As the trade rhetoric between the US and China continues to heat up, it is important for US companies that rely heavily on exports to China to begin to identify alternative market scenarios if tariffs are imposed that would make their US products non-competitive. It is also critical to look at US-China trade from a global trade-balance perspective, as the implementation of tariffs will cause a rebalancing over time, as contracts play out and new arbs open and close.