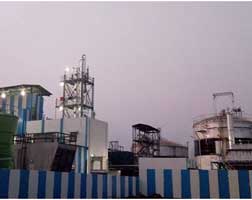 India-based global process solutions company Praj Industries has inaugurated a smart bio-refinery in the country that demonstrates a breakthrough in scale up of its second generation ethanol technology. India’s first integrated bio-refinery demonstration plant for renewable fuels and chemicals is built on Praj’s proprietary platform technology, “enfinity”, for manufacturing ethanol from a variety of agri-waste.

The plant will produce 1 million liter per annum (MLPA) of ethanol by processing a variety of agri-residue like rice and wheat straw, cotton stalk, bagasse, cane trash, corn cobs & stover, and others with superior product yields. With continual research and development, further pipeline of other renewable fuels and chemicals is underway to be produced from this technology platform.

Nitin Gadkari, Union Minister of Road Transport and Highways in India, and Rajesh Pande, Director of Maharashtra Natural Gas Limited, were present at the inauguration. Gadkari commented that with the country’s first integrated bio-refinery plant, India is on its way to greater energy self-reliance.

He also reiterated the government’s initiatives in this direction: “It is heartening to see indigenous innovation emerging from Praj Industries yet again. Today I witnessed India’s first second generation bio-refinery demonstration plant and my belief in India’s capability in technology development as compared to the Western countries, has strengthened manifold. Biofuel is not only cost-effective, but also a pollution-free import substitute of Rs7 trillion.”

He further added, “Agricultural diversification is the need of the hour, wherein agri-waste will generate additional revenues to the farming community. Waste to wealth is the new mantra that emerges from Praj’s innovative world-class second generation ethanol technology.”

In India, an eco-system for 2nd generation ethanol is in the making to achieve the aspired 20% blend ratio. As a part of this drive, 10 to 12 second generation ethanol projects are expected to be finalized, with average capex of around Rs6 billion each. Each of these plants will have the capacity to produce 100,000 liters of ethanol per day.

Praj is at the forefront of this development and has already signed MoUs with Indian Oil Corporation Ltd (IOCL) and Bharat Petroleum Corporation Limited (BPCL) as their technology partner for certain project sites. Meanwhile, experts from oil marketing companies and their engineering consultants have already visited the demo plant and endorsed the success of Praj’s technology.