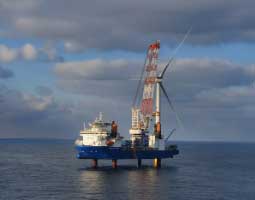 Chemical firm Ineos will purchase 56-Megawatt (198 GWh per annum) of off-shore wind power from RWE Supply &Trading, produced at the Northwester2 wind park in the Belgian North Sea. This is the second renewable power deal agreed by Ineos. This significant deal will take ca. 25% of Northwester2’s renewable electricity. It will reduce the carbon footprint of Ineos in Belgium by a further 745,000 tonnes of CO2 over the length of the contract, which is the equivalent of taking 65,000 cars off the road each year.

This is the second renewable power deal agreed by Ineos as part of its road map to reduce greenhouse gas emissions from across its operations, as the company continues to supply essential products that people increasingly need across medical, food, transport and construction.

Combined with the Norther deal announced in September with Engie, the agreement with RWE increases the Ineos commitment to Belgian offshore renewable wind to 140 MW (~500 GWh per annum). Together this reduces the carbon footprint of its operations by nearly 2 million tonnes of CO2 over the life of the contracts; the equivalent of taking more than 160,000 cars off the road each year.

David Thompson, CEO Ineos Trading said: “This agreement with RWE is another important step as we further reduce our carbon emissions from our energy consumption in Belgium. Combined with our earlier agreement in September, the deals reduce our carbon footprint by nearly 2 million tonnes of Carbon Dioxide. We will continue to look at the options for further expanding the use of renewable energy, as agreements such as this support our roadmap towards a reduction in carbon based energy across our sites.”

This contract illustrates RWE’s strong ambition to increase renewables’ development worldwide, as several PPAs have been signed with major companies during the last months.

“We are excited that we are able to support INEOS in further reducing its greenhouse gas emissions,” said Andre Stracke, CCO at RWE Supply & Trading. “With our global portfolio, we are among the largest producers of power from renewables. We provide tailor-made solutions to industrial customers and municipal utilities and help them to reach their climate protection targets.”