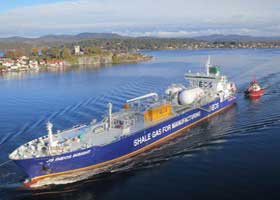 In a move that is seen to be a ripple effect of the availability of cheap shale gas from the US, privately owned petrochemicals firm Ineos plans to expand in Europe with a new European petrochemical production plant and boost capacity at its plants in Scotland and Norway at a cost of about US$2 billion.

It will construct a world-scale propane dehydrogenation (PDH) unit in Europe, able to produce 750,000 tonnes/year of propylene. It said it is considering several possible locations, including a number of Ineos sites at Antwerp in Belgium, where Ineos already has propylene operations.

In its expansion plan, the firm says it is also planning to increase the capacity of its crackers at Grangemouth in Scotland and Rafnes in Norway to over 1 million tonnes each. Both rely on fracked shale gas that is shipped across to Europe from the US.

With these cracker expansions, Ineos will have added up to 900,000 tonnes of ethylene to its overall production capacity

Gerd Franken, CEO Ineos Olefins & Polymers North says, “These expansions and new builds will increase our self-sufficiency in all key olefin products and give further support to our derivative businesses and polymer plants in Europe. All our assets will benefit from our capability to import competitive raw materials from the US and the rest of the world.”

In combination, these three major projects will significantly increase the quantities of propylene and ethylene produced by Ineos in Europe, and will support the continued growth and future profitability of its ethylene and propylene derivative businesses.

Ratcliffe adds, “These projects represent the first substantial investments in the European chemicals industry for many years. It has only been made possible because of Ineos massive US$2 billion investment in our Dragon Ships programme, which allows us to import ethane and LPG from the US in huge quantities.”

Ineos is building a fleet of tankers to transport ethane and propane from the US for its plants. The first shipment to its Grangemouth plant arrived last year.

The project has included the design and long term charter of all eight Dragon class ships, which will collectively create a virtual pipeline across the Atlantic; connection to the new 300 mile Mariner East pipeline from the Marcellus shale in Western Pennsylvania to the Marcus Hook deep water terminal near Philadelphia, together with new export facilities and storage tanks.