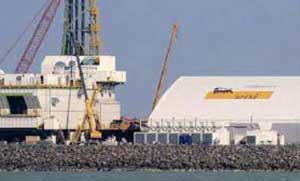 This 387,000-tonne/year SM plant is expected to be commissioned by the 2026-27 fiscal year ending 31 March, with it part of the north Indian refinery’s expansion project boosting its crude processing capacity from 300,000 b/d to 500,000 b/d. The new SM plant will consume the increased ethylene from the expansion and IOC’s existing 120,000-tonne/year benzene production.

SM is used to produce plastic and resins such as polystyrene, acrylonitrile butadiene styrene, unsaturated polyester resins, synthetics rubbers, with it also used in painting and coating applications.

India currently relies completely on SM imports from the Middle East and southeast Asia, with it adding South Korea, Taiwan, China and the US as suppliers in recent years.

Show both logos of ADNOC and Reliance

The agreement capitalises on growing demand for these critical industrial raw materials and leverages the strengths of ADNOC and Reliance as global industrial and energy leaders. The project will be constructed in the TA’ZIZ Industrial Chemicals Zone, which is a joint venture between ADNOC and ADQ, and represents the first investment by Reliance in the region.

Chlor-alkali is used in water treatment and in the manufacture of textiles and metals. Ethylene dichloride is typically used to produce PVC. PVC has a wide range of applications across housing, infrastructure and consumer goods. The market for these chemicals is expected to enjoy steady growth supported by the needs of growing demand, particularly in Asia and Africa.

Production of these chemicals will create opportunities for local industry to source critical raw materials in the UAE for the first time, creating additional opportunities for In-County Value. For example, chlor-alkali will enable production of caustic soda, essential for the production of aluminium. Ethylene dichloride and PVC have a wide range of applications across housing, infrastructure and consumer goods.

Since its launch in November 2020, TA’ZIZ has made significant progress. Development activities at the site have moved forward, with land and marine surveys already completed.  Considerable interest has been received from local and international investors in opportunities across the entire ecosystem and value chain, and agreements with the first phase of investors are nearing finalisation.

Contracts have been awarded for the first stages of development of the TA’ZIZ site, and work is already underway. This includes geotechnical and topographical surveys, a marine bathymetric survey and health, safety, and environment impact assessments, which have already been completed. The surveys will enable civil engineering works to commence, preparing the TA’ZIZ site for construction as well as dredging for an entirely new port facility.

Tenders for the initial design of the seven TA’ZIZ chemicals derivatives projects have been awarded and work is ongoing. Final investment decisions for the projects and awards of related EPC contracts are being targeted for 2022.