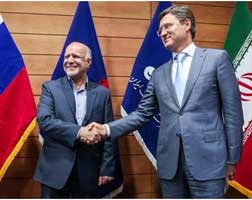 Iran and Russia have signed an agreement to trade oil for products, according to an announcement made by Iranian Oil Minister Bijan Zangeneh.

Zangeneh said the deal has already been concluded, there were no difficulties and everything has been coordinated between the parties. They are just waiting for the implementation from the Russian side wherein Russian oil companies will send tankers, he said.

Iran’s oil ministry is yet to officially confirm the report by the Russian media.

The agreement was initially reached in 2014 when Iran was under Western sanctions over its nuclear program.

Russian traders were to participate in the selling of Iranian oil. In exchange, Iran wanted essential goods and technology from Russia.

When the sanctions against Tehran were lifted in 2016, Russian Energy Minister Alexander Novak said the deal was no longer necessary.

However, Novak said in March 2017that the plan was back on the table with Russia buying 100,000 barrels per day from Iran and selling the country US$45 billion worth of goods, according to a Russian news agency.

Novak had announced in February that Russia’s state trading enterprise Promsirie import has been authorized by the government to carry out the purchase of Iran’s oil through the oil-for-goods program under study by both countries.

To the same effect, Zangeneh had been quoted by the media as saying that Iran would be paid in cash for half of the oil that would be sold to Russia.  The due payments for the remaining half would be made in goods and services, the Iranian minister had said.

Russia and Iran discussed energy, electricity, nuclear energy, gas and oil, as well as cooperation in the field of railways, industry, and agriculture.