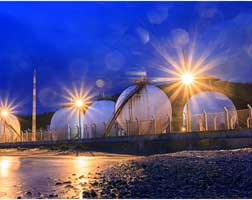 Iran and South Korea are collaborating for the development of mini-liquefied natural gas (LNG) ISO containers over the next four years, according to Saeed Pakseresht, director of research and technology (R&T) at National Iranian Gas Company (NIGC).

The deal was signed during a three-day state visit by former South Korean president Park Geun-hye to Tehran, during which the two countries also signed 19 cooperation agreements.

Based on the agreement,a South Korean consortium, managed by Oceanus will cooperate with KITECH, Dong Hwa Entec, Sung-IL Encare, Gs E&C, KoGas Tech and KGS.The Iranian side also formed a consortium headed by NIGC to develop a mini-LNG plant, according to the contract.

Having special and compact design, mini-LNG ISO containers can be used easily in many places, Pakseresht noted.ISO containers are capable of storing LNG in a cryogenic state for up to 75 days, providing enough time for the cargo to reach its destinations and to serve as a viable means of storage.

Iran, despite having the world’s biggest natural gas reserves, does not have LNG export facilities, so shipping its gas to South Korea would require vast investment and requires investment to develop.

Korea Gas Corp. (KOGAS) — the world’s No.2 LNG buyer — is a main importer of Iranian LNG.

Iran is moving forward quickly in developing its oil and gas resources. South Korean state-owned energy giant KOGAS secured an MoU with the National Iranian Oil Company (NIOC) in May 2016 to work on the Balal gas field in the Persian Gulf.

Following technical studies in the Balal field — one of Iran’s key gas fields in the Persian Gulf — KOGAS presented its proposals for the field’s development to the NIOC. The proposals, Araqi explained, will also consider LNG production.