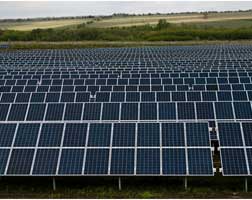 Investment for the project will reach around RUB8 billion (US$138.9 million), according to Hevel General Director Igor Shakhray.

Hevel is a joint venture of Renova Group, a Russian conglomerate with interests in aluminum, oil, energy, telecoms and a variety of other sectors, and government-owned joint-stock company JSC Rusnano.

The memorandum was signed in the framework of the Eastern Economic Forum. The document was signed by Hevel, Hyundai and the Agency for Investment Attraction and Export Support in the Russian Far East.

“The volume of joint investments in the design and construction of hybrid diesel-solar power plants at the first stage – 2018 – will amount to RUB2 billion (US$34.75 million), with subsequent increase of up to RUB8 billion (US$138.9 million). The financing parameters for the project will be discussed before the end of the year,” he said.

The total capacity of the power plants is 40 MW. Shakhray also noted that the first hybrid stations could be constructed in Yakutia.

“We have accumulated considerable experience in the implementation of projects for construction of hybrid generation plants,” he said.

“The results of stations in operation confirm that solar-diesel plants allow reducing diesel fuel consumption to 50% in areas with a high level of insolation, that is why we see high potential for such projects in the Far East,” he added.