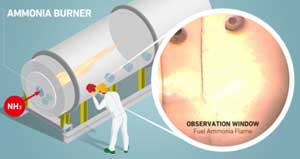 Mitsubishi Power, a subsidiary of Mitsubishi Heavy Industries (MHI) Group, plans to develop Ammonia Combustion for thermal plants, combustion equipment (burners) that can utilize ammonia (NH3) as a fuel, that does not emit carbon dioxide (CO2) when used in power generation. By allowing the use of ammonia as an alternative to coal and other fossil fuels normally used in thermal power stations, this system will support the decarbonization of thermal power generation.

Mitsubishi Power conducted combustion tests at the MHI Research & Innovation Center using basic combustion test furnaces that can simulate the combustion conditions of coal-fired boilers in power stations. These tests were used to compile basic data on ammonia and coal co-firing and ammonia-exclusive firing. The company has also identified optimal systems and conditions for combustion after understanding the characteristics of ammonia firing. These include the generation of nitrogen oxide (NOx) which is a concern for ammonia firing and the potential for unreacted residual ammonia to be released outside the power generation system.

Mitsubishi Power recently conducted combustion tests for ammonia and coal co-firing and ammonia-exclusive firing using a small-scale combustion test furnace. During which the company conducted tests with several types of burners based on its extensive burner design experience and the result of basic tests, to supply ammonia-exclusive burners to utility and industrial boilers in Japan and overseas. These tests confirmed that flames remained extremely stable during combustion, as NOx emissions were as specified by the basic combustion test target, and there is no residual ammonia.

These ammonia burner combustion tests are the first step toward the development of combustion equipment. Based on the results, Mitsubishi Power will demonstrate the technology using a full-sized combustion system and take steps to implement the technology at an existing facility, to gradually introduce the ammonia fuel to the industry.

Going forward, Mitsubishi Power will continue to offer Ammonia Combustion for thermal plants, new solutions that are built on its extensive experience with combustion technology, such as utilizing ammonia as an effective means of cutting CO2 emissions. The company will support MHI Group in pursuing the energy transition, with a focus on the expansion and widespread use of highly efficient, eco-friendly generation technologies. Mitsubishi Power will also contribute to the stable supply of electricity essential for economic growth worldwide and help protect the environment through supporting the decarbonization of energy.