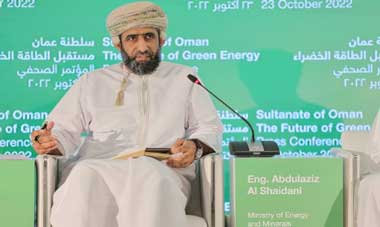 In line with its plan to achieve net-zero carbon emissions by 2050, Oman has set up a state-owned company as part of its Hydrogen Oman (Hydrom) and plans to produce 1 million tonnes of green hydrogen by 2030. Oman has earmarked two blocks in the southern port city of Duqm and another four blocks in Salalah to be tendered for the development of green hydrogen projects. each covering an area of 320 sq km. The blocks in Duqm will be offered publicly on 6 November, in hopes of reaching an award by March 2023, and the Salalah blocks in April 2023, with the aim of announcing awards by the end of the year.

The subsidiary of Oman’s state-owned Energy Development Oman, Hydrom will open a first public bid round in November to award the first land blocks by 2023 to meet its production target.

To reach the goal, the country will need electrolysers with a combined capacity of between 8 GW and 10 GW, to be powered by renewable energy plants totalling 16 GW – 20 GW.

Hydrom will oversee the development and construction of the projects, while working closely with the Oman’s Public Authority for Special Economic Zones and Free Zones to set up infrastructure such as roads, power lines and other installations.

The country estimates it will need a cumulative US$140 billion in investment over this period to reach its 2050 production goal. In total the sultanate has selected three regions in central and southern Oman for green hydrogen production: Duqm, Dhofar and Al-Jazir. The produced hydrogen will cover domestic demand and be exported, with Europe and Asia the most likely offtakers.

Earlier this year, Oman’s Public Establishment for Industrial Estates teamed up with the US company H2 Industries to establish a US$1.4 billion waste-to-hydrogen plant in the Gulf country.