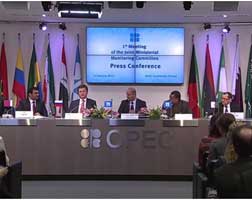 The Joint OPEC-Non-OPEC Ministerial Monitoring Committee (JMMC) announced in its technical report for January 2017 that OPEC and non-OPEC oil producers are on the right track towards achieving full conformity with the recent oil output cut resolution, achieving 86% conformity.

The ministerial monitoring committee said it is satisfied with the progress made towards achieving full conformity with the production adjustments. It noted that there is still room for improvement, and urged all parties to press on towards full and timely conformity.

According to JMMC, its technical report for January 2017 is based on the report of the Joint OPEC-Non-OPEC Technical Committee (JTC) and OPEC and non-OPEC countries.

A technical sub-committee of the JMMC, JTC held its inaugural meeting on February 22 at the OPEC Secretariat in Vienna, during which it discussed issues related to the conformity with the production levels as set out in OPEC’s 71st Ministerial Conference Decision and the voluntary adjustments in line with the Declaration of Cooperation.

JTC considered presentations by the OPEC Secretariat on current market developments and deliberated on various technical issues in regards to reporting and conformity. The finalized technical report was submitted to JMMC, and JTC was lauded on its thorough and transparent report.

JTC’s second meeting is scheduled to take place in Vienna in March 2017, which shall be followed by the next JMMC meeting to be held in Kuwait on March 25 to 26.

Late last year, OPEC and some non-OPEC countries agreed to reduce output by about 1.8 million barrels per day (mb/d) to help end the oil price deterioration.

The deal signatories formed a joint ministerial committee to monitor the countries’ compliance with their production cuts. The committee brings together five ministers: three are from OPEC countries (Algeria, Kuwait and Venezuela) and two are from non-OPEC countries (Russia and Oman).