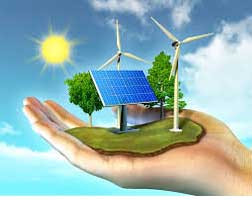 An energy task force advising Japan’s foreign minister has proposed boosting renewable energy and shifting away from coal-fired and nuclear power at home.

They argue that the country’s energy policies are outdated and undermine its global competitiveness.

The advice comes in a report commissioned by minister Taro Kono, a maverick lawmaker with prime ministerial ambitions, and echoes his own convictions, pitting him against Japan’s powerful Ministry of Economy, Trade and Industry (METI). METI urges using coal at home and financing coal-powered projects abroad.

The task force report, presented to Kono, argues nuclear power has lost economic competitiveness and says the world’s third-biggest economy should cut reliance on atomic energy to as little as possible, and instead boost use of renewables.

“If Japan focuses on renewable energy rooted in its abundant natural resources and reduces dependence on imported fossil fuels and uranium, this will contribute to its energy security and make possible a new domestic economy,” the task force said in the report. “It is obvious that Japan is lagging.”

The report comes as METI, also a proponent of nuclear power, is reviewing the country’s energy policy. METI said it had no immediate response to the task force report.

In its current official targets Japan, one of the world’s biggest importers of thermal coal and natural gas, aims for renewables to make up 22 to 24 % of its energy mix in 2030, up from about 14 % now.

Kono, in a speech in Abu Dhabi last month, called that target “lamentable” since 24 % is the global average now. The U.S.-educated son of a former foreign minister, Kono has made no secret of his ambition to lead the country at some point and has long been critical of Japan’s nuclear power industry.

Thermal coal imports rose to a record last year, while those of LNG were near record highs, as the fuels filled the gap in power generation left by the country’s slow restart of nuclear power plants closed after the 2011 Fukushima disaster. Japanese companies are planning to build more than 40 new coal plants.

The Fukushima crisis has also spurred a push into renewables, mainly solar energy, but non-hydro renewable power only accounted for 3.5 % of Japan’s electricity supplies in October last year. Renewable energy use has surged around the world in recent years as costs have come down.

Meanwhile, the Japanese government will next month submit a bill to parliament to make it easier to develop offshore wind power, the Yomiuri newspaper reported on Tuesday.