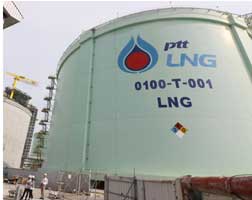 Wirat Uanarumit, chief operating officer for the upstream petroleum and gas business, said the two companies made a tentative agreement last month, with PTT expected to hold 10% of the joint venture.

The move aims to help create value in PTT’s midstream business, which is small compared with its total business covering both the upstream end, with PTT Exploration and Production Plc (PTTEP), and its downstream gas business, including a liquefied natural gas (LNG) terminal at Map Ta Phut that operates an LNG distribution business.

He said PTT has set up a new company, PTT Global LNG Co, to invest in the project. All details and project finances are expected to be in place by the third quarter of this year, when construction is also expected to start.

PTT set up the subsidiary last month with PTT and PTTEP holding a 50% stake each. The initial capital registered was 8 million Baht.

Wirat said the new LNG business is expected to create added value in the existing gas supply chain. Last year, PTT agreed to buy 1 million tons each year of LNG from Petronas, increasing by 2019 to 1.2 million tons of LNG a year over a 15-year agreement.

PTTEP has large gas resources and also the potential to produce LNG, including 8.5% of production from a joint venture in Mozambique’s Rovuma Off-Shore Area 1. The company is expected to make a final decision by the end of this year on whether to embark on that project after it was delayed during the global oil price collapse.

Wirat said PTT is considering increasing the capacity of its LNG receiving terminal capacity at Map Ta Phut in Rayong province to 15 million tons a year, up from the current 11.5 million tons, in line with government policy to secure gas supply at home.

Thailand is expected to import more than 30 million tons of LNG after 2035. Most of the LNG importing business is likely to be run by PTT as it is now. The projected rise in LNG demand and imports is largely due to the delay in the commercial operations of the 800-megawatt coal-fired power plant planned for Krabi, previously due in 2023.

Energy policymakers are conducting a feasibility study of a gas-fired power plant instead of coal, positioning LNG to play a major role in Thailand’s power business. PTT is operating the first unit of the LNG terminal in Map Ta Phut with a capacity of 10 million tons and is also building a second unit of LNG receiving terminal in Nong Fab in Rayong with a capacity of 7.5 million tons, to start running in 2023.

The company is also designing the third unit with a capacity of 11.5 million tons. Thailand’s demand for gas is growing each year, spurring an increase in LNG imports from 3 million tons this year to a projected 10 million tons in 2019.