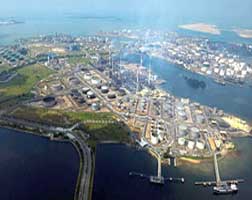 Singapore has become the first Southeast Asian country to roll out efforts to cut greenhouse emission, with the mooting of a carbon tax to be implemented in 2019. The tax is likely to be between S$10 and S$20 per tonne of greenhouse gas emissions, in line with carbon tax rates around the world.

Though it will generally be applied on the largest emitters of greenhouse gases, such as power stations and direct emitters, a government official has been quoted as saying that it will also cover oil refineries, which are already grappling with high costs in one of the region’s key chemical hubs.

According to Reuters, the official said that the proposed threshold would be 25,000 tonnes of carbon dioxide equivalent of greenhouse gas emissions annually. The refineries currently exceed this threshold.

The additional tax would raise electricity costs between 2% and 4%, according to a government report released, thus adding on US$3.50 to US$7 to the cost of processing a barrel of crude into refined oil products such as diesel or gasoline. This will not only eat into the refining industry profit margins, it will also reduce competitiveness and particularly affect older and less-efficient refineries.

Calling it “the most economically efficient and fair way” to reduce greenhouse emissions, the government said it had been studying the option for several years. It said the carbon tax will not only help fund measures by industries to reduce emissions, it may also spur new opportunities in green growth industries such as clean energy.

Industry stakeholders are expected to be consulted and the final carbon tax and exact implementation schedule will be decided after consultations and further studies. Measures will also be introduced to help ease the transition.

Singapore was one of the more than 120 countries to ratify the Paris Agreement last year, formally committing itself to reduce climate change.

As part of the agreement, Singapore pledged to cut emissions by 36% below the 2005 levels by 2030 and stabilise emissions with the aim of peaking around 2030.

According to the World Bank, some 40 countries and more than 20 cities, states and provinces already use carbon pricing mechanisms, with more planning to implement them in the future. Together the carbon pricing schemes now in place cover about half their emissions, which translates to about 13% of annual global greenhouse gas emissions.