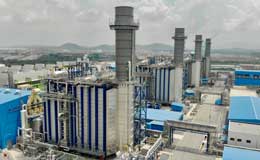 Mitsubishi Power, a subsidiary of Mitsubishi Heavy Industries (MHI) Group, inaugurated the operation of a newly completed M701JAC gas turbine, which will serve as a core component in a project to build two natural gas-fired power plants in Thailand on March 31.  The M701JAC joins the global fleet of J-Series and JAC-Series gas turbines that have amassed more than 1.3 million operating hours; with 83 units ordered across the globe.

The project is part of a joint venture between Gulf Energy Development Public Company Limited and Mitsui & Co, Ltd.

The M701JAC, the first of its kind in Southeast Asia,  is also the first of eight units ordered on a full-turnkey basis in 2018. These eight units will comprise gas turbine combined cycle (GTCC) systems with a total output of 5,300 MW. A 25-year long-term service agreement (LTSA) for these units is also in effect. The construction of the remaining seven units has commenced and is scheduled for a full launch of commercial operations in 2024.

The two ultra-large-scale power plants are under construction in Chonburi and Rayong. Each plant will have an output of 2,650 MW and use natural gas as its primary fuel source, along with four power trains each incorporating a gas turbine, steam turbine, heat recovery steam generator and generator.

Mitsubishi Power will manufacture and supply the gas and steam turbines as well as ancillary equipment, while Mitsubishi Electric Corporation will provide the generators. The power generated will be sold to the Electricity Generating Authority of Thailand (EGAT) to support providing the country with a reliable and highly efficient source of clean energy.