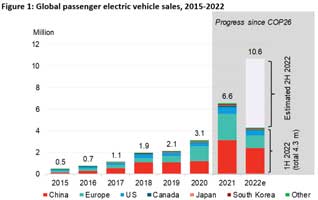 Adoption of zero-emission vehicles accelerated in the past year across almost all markets and vehicle segments, according to the 2022 Zero-Emission Vehicles Factbook published by research company BloombergNEF (BNEF) at COP27 in Egypt.

The ZEV Factbook finds that global momentum toward zero-emission road transport has continued to accelerate in 2022, with passenger electric vehicle sales on track for more than 10 million units, up from 6.6 million in 2021. Over 13% of new car sales globally in the first half of 2022 were electric, rising from 8.7% for all of 2021. Global lithium-ion battery manufacturing capacity also increased 38% since 2021 and overall spending on clean road transport worldwide is set to exceed $450 billion this year. 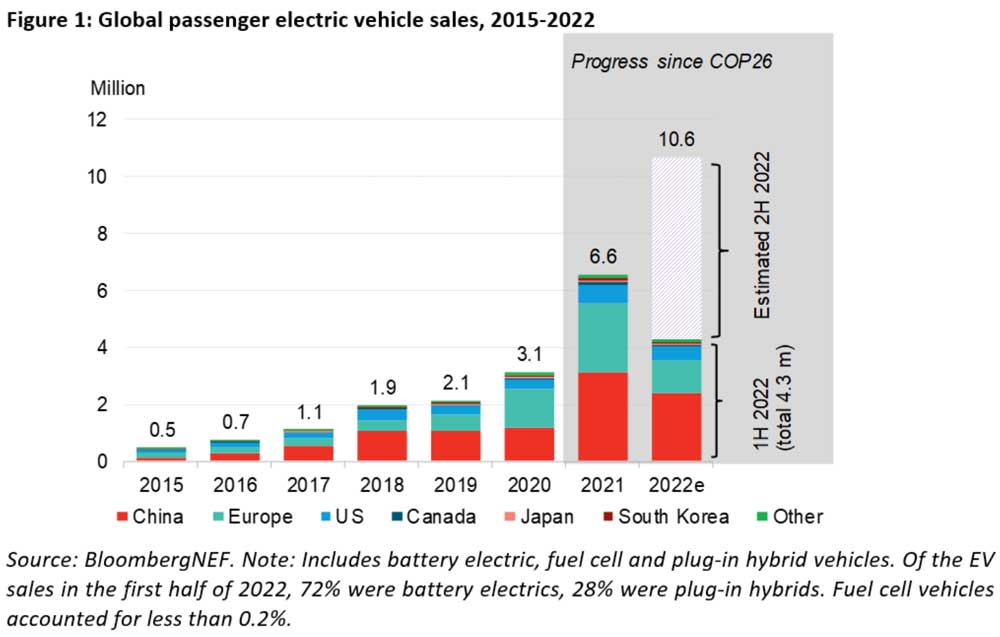 The ZEV Factbook has been produced by BNEF in cooperation with the Accelerating to Zero Coalition and in partnership with Bloomberg Philanthropies, to coincide with COP27 – the 2022 United Nations Climate Change Conference. The first Zero-Emission Vehicles Factbook was released at COP26 in Glasgow and the updated 2022 publication tracks the progress that has been made toward achieving global net-zero emission in the road transport sector.

The adoption of zero-emission vehicles has already reduced oil consumption and carbon dioxide emissions. Electric vehicles of all types – including cars, buses, motorcycles, scooters, vans and trucks – are expected to avoid almost 1.7 million barrels of oil use per day in 2022, up from 1.5 million barrels per day in 2021. These vehicles are currently eliminating 152 million metric tons of CO2 per year, with the biggest contribution coming from the large fleet of electric two- and three-wheelers in Asia.

The ZEV Factbook was welcomed by Alok Sharma, COP26 President. “The BNEF Factbook shows that, despite the global energy crisis, the zero-emission vehicle transition has continued to accelerate since we launched the ZEV declaration at COP26. It also highlights that the ZEV transition is key to permanently ending our dependence on oil,” said Sharma. 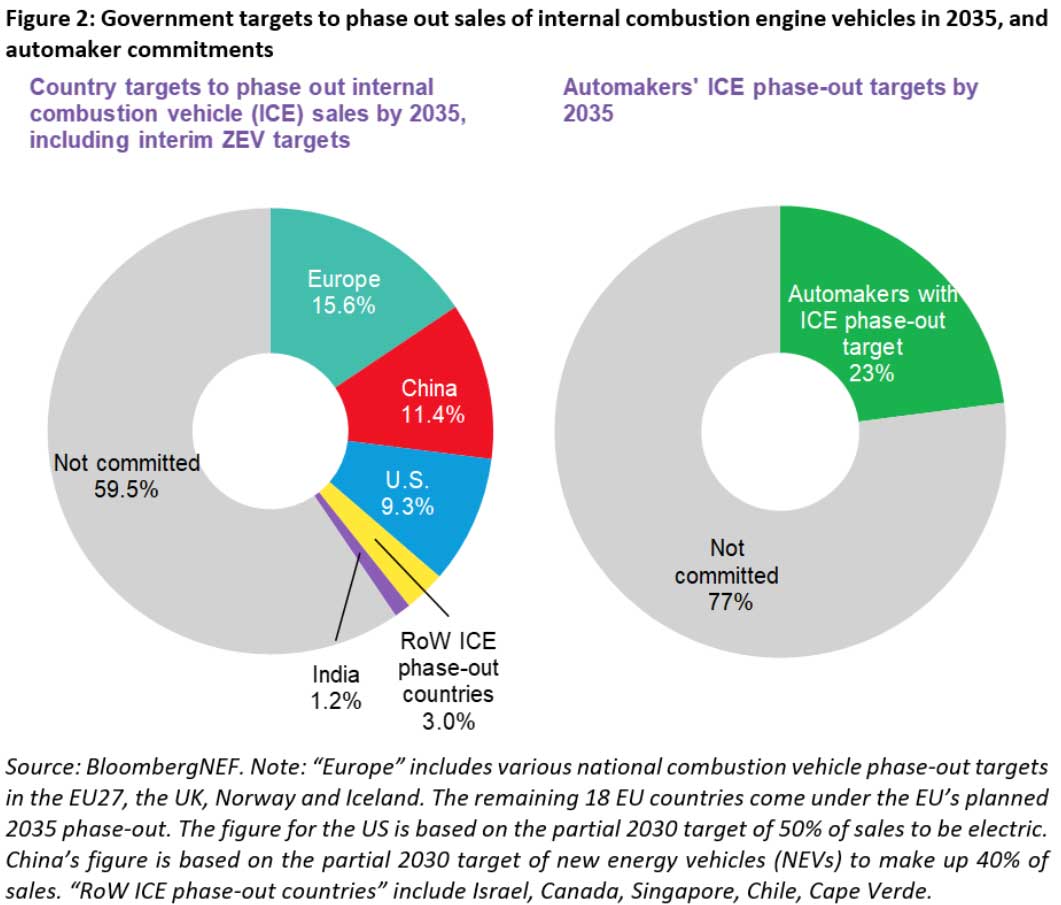 However, the report also sounds a note of caution as progress on new commitments to ZEVs from both automakers and governments has slowed over the past year. National ZEV targets and internal combustion engine (ICE) phase-out targets cover nearly 41% of the global passenger vehicle market by 2035, similar to a year ago. Automakers with 2035 ICE phase-out targets account for 23% of the market, a slight increase from 19% a year ago. This increases to 30% if automakers’ targets for 2040 are included.

Aleksandra O’Donovan, lead author of the report and the head of BNEF’s electric vehicle research team, noted that there is a growing gap between wealthy and emerging economies on ZEV adoption. “While many of the indicators in this report are pointing in the right direction, most countries still have a long way to go before we can be confident that we are on track for a net-zero emission transport sector by mid-century,” stated O’Donovan.

The report concludes that national, regional and local governments must continue to raise ambition and implement stable, long-term policies that induce the growth of zero-emission transport and manage the phase-out of polluting vehicles.

Nigel Topping, UN Climate Change High-Level Champion for the UK, COP26 added: “We call on more actors to come forward next year and make and implement ambitious commitments to transition to zero emission vehicles and reap the benefits of cleaner air, jobs, economic growth, and keeping our Paris Agreement goals within reach.”