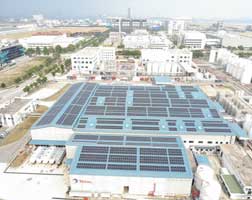 Multinational oil and gas company Total is solarising its largest state-of-the-art lubricants oil blending plant in Singapore. Opened in 2015, the Tuas plant is a major global hub, boosting lubricants supply in the Asia-Pacific region, which represents more than 40% of the worldwide lubricants demand. The new solar photovoltaic (PV) system installed by Total Solar Distributed Generation Asia has a capacity of 1.2 MW-peak. Equipped with 3,682 solar panels, this installation is designed to generate 1,511 MW hours of electricity per year, covering 35% of the site’s energy needs, reducing its reliance on traditional fuels and avoiding up to 528 tonnes of carbon dioxide emissions a year.

The Tuas Lubricants plant was constructed with sustainability in mind from the start, including a roof specifically designed to withstand the weight of solar panels. The facility also benefits from a pier and shared equipment facilities that allow Total to both ship and receive base oil and additives to and from the vessels directly rather than through land transportation, reducing significantly onsite CO2 emissions, by up to 87%.

Tan PaiKok, Vice President of Operations in Asia-Pacific and Middle East for Total Lubrifiants commented: “With Asia being a key region for future energy demand, we look forward to supporting that growth through cleaner and sustainable means, and contributing to Singapore’s journey in sustainability.”

Gavin Adda, CEO of Total Solar Distributed Generation for Southeast Asia, added “The solarisation of the Tuas plant is in line with the objectives announced on 29 October by Trade and Industry Minister Chan Chun Sing, which are to ramp up Singapore’s solar capacity to 2 Gigawatt-peak (GWp) by 2030 in order to support the country’s energy needs.”

This project is a part of Total’s worldwide program of solarisation of its industrial facilities. Earlier this year, the Group has inaugurated its thousandth solarized service station worldwide. Total has notably set a goal to solarise 5,000 of its stations in 57 countries, with work accelerating in the coming months to reach around 1,000 stations per year.