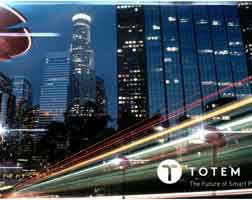 “Totem believes design can fundamentally change the world. We’re on a mission to realize the full potential of energy’s transformation by providing communities and corporations with intelligent, experiential and engaging structures – something that delivers powerful functionality and tells an easily understood story about clean energy and the next generation of critical services,” said Brian Lakamp, CEO and founder of Totem Power. “We are building technology for the cities of tomorrow.”

In order to support the emerging needs of truly smart and clean cities, energy, communications and transportation need to undergo radical transformations. Instead of confining smart energy utility to only rooftops and garages, Totem integrates it into a visually-stunning product designed for the living spaces of communities. 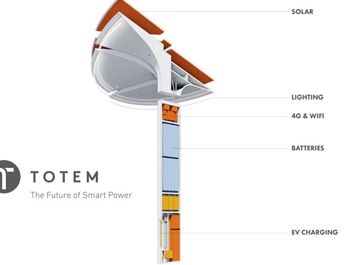 With Totem’s scalable model, the grid will be able to shatter the limits on distributed solar and wind energy generation and storage that the current network imposes. Totem’s breakthrough product is designed for placement in locations such as city streets, schools, corporate campuses and retail settings.

Totem provides a reliable hub for Wi-Fi and 4G cellular services that support increasingly connected lifestyles. Moreover, Totem is designed with an eye toward the future of energy networks enabled by connectivity. Electric vehicle (EV) charging in the Totem platform also lays the groundwork for the fundamental shift in transportation infrastructure that has already begun.

Totem’s platform also plays a pivotal role in emergency preparedness and resilience. With on board generation and storage, Totem’s energy foundation is self-sustaining and capable of maintaining critical services. Most importantly, communications powered by Totem will continue to operate in the event of grid failure.

Totem stands as a symbol for the limitless possibilities of smart cities by simultaneously tackling key aspects of infrastructure modernization. The product is set to be released in Summer 2017.