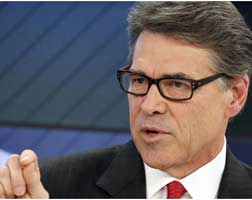 Accusing the Obama administration of hindering US fossil energy production, he said that the Trump administration was “ending the bureaucratic blockade that has hindered American energy creation.”

In a speech at the US Energy Information Administration’s annual energy conference, Perry said that during the Obama administration production on federal lands and waters declined while oil and natural gas permits “were slow-walked or slow-talked and then they were left to wither on the vine.”

“Those days are over,” Perry said. “We’re done with that type of approach.”

However, Perry’s statements seem at odds with the oil and gas shale boom which took place under the last administration. During Obama’s presidency, for example, US dry gas production climbed from about 20.6 trillion cubic feet (Tcf) in 2009 to a peak of nearly 27.1 Tcf in 2015, according to EIA data. US crude oil production climbed from about 5.35 million b/d in 2009 to a peak of nearly 9.42 million b/d in 2015, according to EIA.

Perry, who was heckled during his speech for his climate change views by two separate protesters, said that the US could boost domestic oil, gas and coal production while protecting the environment, but offered no details on how this would be achieved.

He also pointed to goals to protect the US electric grid, keep nuclear power in the US energy mix and to use US energy production as a diplomatic tool.

“America must lead and for America to lead we’ve got to realize that energy is a strategic resource that can advance our interests,” Perry said.

Perry’s speech comes during what the Trump administration is calling “Energy Week,” which it hopes to use to highlight its push to grow US energy production.

The Trump administration has proposed a US$28 billion budget for Perry’s Department of Energy in fiscal 2018, a 5.6% cut from fiscal 2017 spending levels. Among other elements, the proposed budget calls for selling off half of the Strategic Petroleum Reserve, a proposal the White House claims will raise about US$16.59 billion by 2027.

Yet, even with the prospect of tightened purse strings for the department, Perry said DOE would “continue to increase exports of American energy… develop a very diverse portfolio of energy resources, harden our grid against sabotage and potential acts of terrorism [and]… aggressively invest in the science and research that can solve our greatest energy challenges.”

He added: “Instead of relying on the heavy hand of regulation and instead of choosing political favorites and tilting the energy marketplace, [we will] pursue an all-of-the-above strategy that is agnostic to source while pursuing technologies that can reduce emissions.”

Perry’s comments on renewable energy were mixed. While touting the boom of wind energy in his home state of Texas and contending that the administration would “ensure that renewable energy finds its way to the grid,” he also reiterated his concern that baseload capacity has been “tossed aside in the name of some political favorite.”

Perry in April directed the department to conduct a review of regulatory and other burdens imposed by the Obama administration on baseload generators, such as coal and nuclear power plants. That report is expected to be released in July.

“These politically-driven policies, driven primarily by hostility to coal, threaten the reliability and the stability of the greatest electrical grid in the world,” he said. “I recognize the markets have had a role in the evolution of our energy mix, but no reasonable person can deny the thumb, or even the whole hand if you will, that’s been put on the scale in favor of certain political outcomes.”

Perry said the administration’s plan was to ensure grid reliability and economic security by using all of America’s abundant resources.