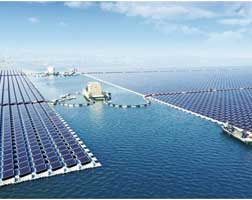 The world’s biggest floating photovoltaic (PV) farm has started generating electricity and has been connected to the local power grid in China.

The floating solar farm, with a capacity of 40 megawatts(MW), is situated in the coal-rich Huainan City in Anhui Province. It is located in a former mining area that turned into a lake by subsidence and heavy rain, with a water depth ranging between 4 and 10 meters.

The facility was built by photovoltaic maker Sungrow Power Supply Co. using its central inverter unit SG2500-MV. The SG2500-MV inverter system is able to convert direct current from solar panels into alternating current that could be sent to the grid. The system also houses an inverter, a transformer, and a switch gear in a single unit called a turnkey station.

The cooler air at the surface helps to minimize the risk of the solar panels overheating. As a result, a decrease in performance is prevented. The panels are also reported to be linked up to a central inverter and combiner box that are customized to work with floating power plants. This ensures they are resistant to high levels of humidity and spray from the water.

The new solar farm is just one of the many solar energy operations sprouting around China.  Floating solar farms can reduce water evaporation and prevent algae growth. Water could also help cool down modules and cables, thus making it more efficient on power generation. It could also address city planning issues and free up land in more populated areas.

China is currently leading in the adoption of solar power. In fact, its solar power output jumped by up to 80% as of March 2017, managing 21.4 billion kilowatt-hours in this year’s first quarter. Aside from being a home to the world’s largest floating solar panel, China also holds record for the biggest land-based solar panel, covering 27 square kilometers in Qinghai province.

By the end of the decade, China could lower prices offered to photovoltaic developers by over a third with solar power plants projected to compete coal facilities within a decade. It also revealed its plans to increase its use of non-fossil fuel energy sources by 20%.