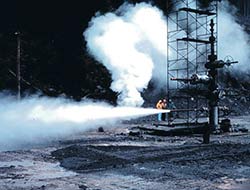 JAKARTA – The Indonesian government have issued 15 permits for domestic and international firms to manage geothermal resources in the country in a bid to develop power plants with a combined capacity of 35 thousand megawatts.

The president said geothermal resources had the potential to generate 29 thousand megawatts of electricity. If all the investors realized their licenses, they could produce 1,515 megawatts.

He said the government would also provide improved services to investors who had invested in new and renewable energy.

While fossil-based energy deposits including oil and gas continue to deplete, Indonesia, which is endowed with abundant geothermal resources, must boost the use of new and renewable energy, he said.

He further called on all elements of the community to benefit from other energy sources, including crude palm oil, as Indonesia is the largest palm oil producer in the world.