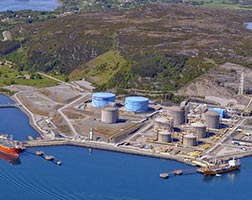 OSLO – ABB, the leading power and automation technology group, has been awarded a US$15 million contract by Norwegian oil operator Gassco and the Technical Service Provider Statoil to provide Kårstø gas-processing complex with an upgraded version of the control system software. The order reflects the importance of this facility, which receives gas and condensates from 28 fields in the North Sea, and is the third largest producer of natural gas liquids in the world.

Kårstø already has one of the largest 800xA safety and automation installations in the world, and now ABB will upgrade the human-machine interface (HMI) at the plant, including operator stations, system software and servers with the recently launched sixth version of its 800xA distributed control system (DCS). Once installed, the updated DCS will manage the processing plant’s production of 90 million cubic meters of rich gas a day. It also includes two test systems and three process simulators.

By upgrading the 800xA control system, Kårstø Gas plant will have the most modern automation technology available. The new system will increase plant safety and operational efficiency. ABB first installed the safety and automation systems at Kårstø in 1985.

Project execution is already in progress at ABB, and the installation will be carried out in mid-2016 to take advantage of the maintenance shutdown that takes place at Kårstø every sixth year. However, the 800xA 6.0 version enables upgrades at any time in the future, without the need to pause operations.

“We interpret this order as a confirmation that Gassco and Statoil is satisfied with ABB’s work on the safety and automation systems at Kårstø over the past 30 years. We look forward to successfully delivering the latest upgrade project,” said Per Erik Holsten, Managing Director of ABB’s Oil, Gas and Chemicals business.

The Kårstø award, which was made in the first quarter of this year, is part of a wider framework agreement whereby ABB provides Statoil with control systems for onshore and offshore plants.

ABB (www.abb.com) is a leader in power and automation technologies that enable utility, industry, and transport and infrastructure customers to improve their performance while lowering environmental impact. The ABB Group of companies operates in roughly 100 countries and employs about 140,000 people.