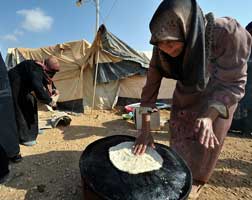 Many years ago, the UN’s refugee agency printed a poster of Albert Einstein with the caption ‘Einstein was a Refugee’ – a reminder of the enormous contribution that refugees have made to the world. But this World Refugee Day, instead of celebrating this contribution, the international community will unfortunately have to focus on finding solutions for an unprecedented global crisis.

Antonio Guterres, the head of the UNHCR, has spoken of a world facing ‘an unchecked slide into an era in which the scale of global forced displacement as well as the response required is now clearly dwarfing anything seen before’. There are now 60 million forcibly displaced people in the world: that’s almost the same as the combined populations of Canada and Australia. Half of these displaced people are children, and the overall numbers are increasing rapidly.

Addressing this problem demands coherent migration and refugee policies. Reversing the trend will require effective conflict resolution and prevention. These all remain a long way off. In the meantime, practical, humane and cost-effective ways to respond to the needs of displaced persons must be found.

The cost of energy

Like everyone else, displaced people need access to safe, reliable and clean energy, whether for lighting, heating, cooking, sanitation, earning a living or communicating. They rarely get this. Every situation is different, but millions of people in camps depend on rudimentary or primitive energy solutions, such as three-stone fires and candles.

This has profound human, environmental and economic consequences. Accidents with naked flames can cause injuries and death, such as this month’s tragic example in a Syrian refugee camp in Lebanon’s Bekaa Valley where at least four people were killed when dozens of tents caught fire.

Indoor cooking with open fires contributes to serious respiratory illness, chiefly among women and children who tend to be most exposed to the fumes. The same women often also spend hours each day gathering firewood, increasing the risk of gender-based violence, especially as the area around camps becomes deforested and the women are forced further and further afield in search of firewood.

Humanitarian agencies try to provide what energy they can but their efforts can often be inefficient and expensive.

The potential benefits of doing things differently are obvious. They include reduced deforestation, carbon emissions and pollution; improved health and reduced levels of violence; and lower costs. Improved energy access can also create livelihood opportunities and could help improve relations between displaced people and local populations by supporting enterprise or generating benefits for both communities.

So why is access to sustainable energy not front and centre in responses which seek to address the needs of displaced people?

The problem is not technological. A breath-taking range of innovative products and services exists to meet needs for everything from lighting and cell phone charging, to cooking and heating, to water pumping and cooling. Some technologies, such as solar PV and mini-grids, are highly advanced. Others, such as fuel-efficient cookstoves, are basic. All offer cleaner, safer and more reliable energy and cost savings, and represent a significant improvement on the current situation.

However, a host of obstacles – political, financial, and institutional – constrain humanitarian agencies in their efforts to meet the energy needs of displaced populations.

Governments and local authorities in host countries may be reluctant to facilitate energy access for refugees, particularly if local populations lack adequate living conditions, or if they fear increased energy provision may prolong a camp’s existence.

Although most solutions offer very attractive payback times, agencies may struggle to find predictable, long-term funding to procure them. Within the humanitarian system, energy often falls through the cracks. Dedicated agencies, organizational arrangements and funding lines exist for basic needs such as food, water, shelter and health. But not for energy. This means that in the rush to save lives and respond to crises, energy provision is an afterthought – uncoordinated and short-term.

The scale of these challenges cannot be understated. Success will require rewiring the humanitarian system, developing new funding models, building capacities and expertise where none currently exist, and persuading governments with responsibilities for refugee influxes to try new approaches.

Crucially, it will also require the involvement of the private sector, which is often where the deepest expertise and capacity for innovation lies.

The Moving Energy Initiative, a partnership between UNHCR, GVEP International, Chatham House, Practical Action Consulting, the Norwegian Refugee Council and the UK Department for International Development has been formed to address these challenges. Working in different countries and with other collaborators, the initiative is designing and piloting new approaches and models for energy provision among displaced populations, building the case for reform and developing recommendations for systemic change.

As well as improving energy provision, the initiative will spread the word about successful approaches and develop recommendations for systemic change.

This year the international community will agree a new set of Sustainable Development Goals. As currently proposed, the seventh goal is to ‘ensure access to affordable, reliable, sustainable and modern energy for all’. If ‘all’ is to mean everyone, the humanitarian system has to start changing now.- Chatham House