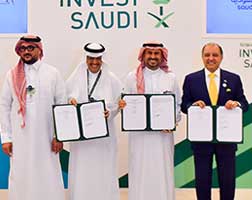 Industrial gas company Air Products says that it is in final negotiations to form a joint venture with Saudi Aramco, Saudi Arabia’s ACWA Power and Air Products Qudra to acquire the gasification, power and industrial gas assets at Jazan Economic City, representing a total investment value of about US$11.5 billion.

Air Products holds a 55% stake in the jv, with ACWA Power holding 25% and Aramco the remaining 20%, said the firms.

The US industrial gas giant first revealed news in August 2018, when the companies had signed an agreement for a gasification/power joint venture to serve Aramco’s Jazan Refinery and terminal.

The assets, to be purchased from Aramco, will include gasification assets, power block and associated utilities, as well as oxygen and desalinated water facilities.

The jv will own and operate the gasification/power facility under a 25-year contract for a fixed monthly fee, the companies said last year.

Saudi Aramco will supply feedstock and the joint venture will produce power, hydrogen and other utilities for Aramco.

Air Products says it looks forward to concluding negotiations and expects to close on the transaction by the end of calendar 2019.