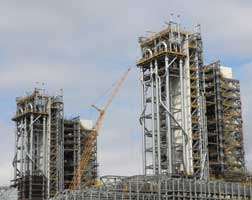 Furthermore, unlike many projects in the Middle East based on low-cost feedstock, Sibur says it plans to offer a diverse palette of grades from the new production site when onstream next year with more than 20 grades to be produced.


Of the grades to be offered are HDPE and LLDPE grades for extrusion of films such as LLDPE grades with MFI 0.9 and 2 that can be used in production of general purpose blown or cast films, such as agricultural films, stretch films, liner bags, sacks. Meanwhile, its LLDPE grade LL30200 FE with MFI 3.0 is targeted at cast extrusion of stretch films and co-extrusion to produce stretch packaging, while the HDPE grade HD10500 FE with MFI 10 respectively (under load of 21.6 kg) for extrusion of thin films used in producing t-Shirt bags, shopping bags and grocery bags.

For blow moulding, it is offering its bimodal HDPE grade HD03580 SB with MFI 0.3 and density 0.958, designed for production of up to 30 l containers for storage and transportation of household chemicals and cosmetics, while HDPE grade HD10530 LB with MFI 10 and density 0.952 has high ESCR and impact strength and is recommended for medium and large blow  aggressive products.

It also has 14 various grades of PP and PE for the production of light weight items with low deformation during lower cycle time as well as HDPE grades for injection moulding allowing for high mechanical strength, high resistance to vertical load and aggressive mediums.

One of the company’s key expansion areas in the mid-term is new dioctyl terephthalate (DOTP) production at Sibur-Khimprom (Perm), launched this year with a total capacity of 100,000 tonnes. It became the largest production site of its kind in Europe, and its size means that the company will not only be able to substitute imports but will also be able to supply DOTP to international markets.

Furthermore, it is looking at the feasibility of the Amur Gas Chemical Complex, in Svobodny, Eastern Siberia, in partnership with China’s Sinopec that will have a 40% stake. A decision will be made by year-end or early next year. The Amur project will have total capacity of up to 1.9 million tonnes/year of PE, with the majority of production from this project for the Chinese market.