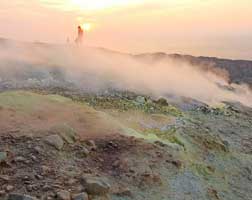 Energy storage has been identified as a key to climate change mitigation. Globally, only 3% of power capacity is being stored. To limit global warming to below 2°C, energy storage capacity needs to triple by 2050. To do this we need to look at innovative ways of speeding up the process. Could energy-storage-as-a-service be one of the solutions? The report “Beyond the Tipping Point: Future Energy Storage” explores the opportunities associated with energy storage, as well as the obstacles standing in the way of its implementation.

Through energy storage we can use energy more effectively, minimizing carbon emissions. To limit global warming to below 2°C energy storage capacity would need to increase from 140 GW in 2014 to 450 GW in 2050. Today, only 3–4 percent of electricity generated by utilities globally is stored.

The energy world is on the verge of a storage revolution, but there is a risk that this transition will be hindered by a variety of obstacles. Perhaps the main challenges to overcome are common misconceptions about the costs, safety and commercial availability of storage technologies.

Within our societies, there are groups of people more willing to adopt new technologies. Everett Rogers popularised the diffusion of innovations theory and the adoption curve in the 1960s. According to this theory, the decisive point, the so-called tipping point, for expansion of a technology beyond the early adopters lies at a market share of between 15 and 18 percent. Experts agree that energy storage is a vital part of the equation to solve climate change. However, the new technologies for energy storage still seem to be on the wrong side of the tipping point. The report “Beyond the Tipping Point: Future Energy Storage” investigates why this is and how it can be changed.

At the global level, energy storage can help curb climate change by decreasing emissions from electricity, heating and cooling needs. At the community level, energy storage can involve more resilient and flexible energy systems with higher levels of energy security through integration of locally produced energy. From the citizen perspective, energy storage holds the benefit of improved control of energy costs and origin. For the private sector, energy storage can open new business opportunities with constant innovation of offered services. These can range from energy-storage-as-a-service enterprises to market actors expanding to installation of storage systems, charging stations and virtual power plants.

In the energy-storage-as-a-service model, energy becomes available to the customer as a service, in the same way as subscriptions for food, accessories, films or music. Energy-storage-as-a-service can curb the barrier of high upfront investment costs, help aggregate multiple storage revenue sources, and give the public the opportunity to test a solution without committing to a long-term investment.

Another example relates to the excess heat of our homes. Storage can be used for buildings that have both heating and cooling demands – such as offices, shopping centres, hospitals and airports. Storing your own waste heat and cooling for later use in the season when it is needed can save primary energy and as well as money.

Energy storage myths in the way of development

There are several myths standing in the way of energy storage reaching its full potential. Through debunking these myths, we can make energy storage an integral part of the future energy system. One energy storage myth is that we have to wait for the perfect solution.

A battery with unbeatable performance, high energy density, low costs and environmental impact as well as longer lifetime. We might be lucky enough to see these batteries in markets sometime in the future, but just not as soon as the news reports say. A battery being developed right now in a lab will take at least 10 years to become commercially available. The battery needs to be tested rigorously to ensure operational safety, and then comes the challenge of achieving economies of scale.

The temperature in the ground is more or less constant over the year and equals the annual average air temperature. Thus, the ground temperature in Berlin is 9°C, in Stockholm 6.6°C, and in Helsinki 5.6°C – temperatures that are not high enough to be used to directly heat a building. However, this temperature is much higher than the air outside in winter and can therefore be used for pre-heating.

Another common misconception is that hydrogen is dangerous. However, hydrogen is no different from any other fuel when it comes to safety procedures and guidelines. Unlike petrol, however, hydrogen disperses rapidly into the atmosphere in the event of a leak. Hydrogen is not reactive at room temperature and water vapour forms when it burns. Despite promising potential due to its versatility and capacity for storing renewable energy, hydrogen has still not been widely adopted. Hydrogen is currently limited to small-scale storage applications and is mostly produced from processes that are not emission-free.

In order for citizens to adopt hydrogen to a greater extent, infrastructure for refuelling needs to be built and the public and private sector need to collaborate. Hydrogen production is responsible for annual CO2 emissions equivalent to the combined emissions of Indonesia and the United Kingdom.  As we use more electricity overall and as the deployment of renewables increases, we should expect hydrogen to take a leading role, rather than the marginal role it now occupies. Hydrogen storage can work on both the small and large scale, storing energy locally but also capable of distribution through international supply networks. A simultaneous roll-out of the necessary fuelling infrastructure is a prerequisite for ensuring that demand will be properly met.

Increased knowledge and understanding crucial for our future

The economics of storage is improving and, in some cases, has reached cost-parity with conventional technology alternatives, although the still high upfront costs can discourage investments. Studies have shown that decisions regarding household consumption and choice of technologies are also influenced by behavioral aspects and are not purely driven by financial incentives. In other words, no matter the degree to which storage solutions are perfected through continuous research and development, their full potential will not be realised until the public accepts, understands and desires these technologies.  New technologies are more vulnerable to various misconceptions than are well-established technologies. A classic example of this vulnerability is the Hindenburg disaster, which occurred nearly one hundred years ago, and the role it played in hydrogen deployment. A disaster, a misapplication, higher than expected costs; there is little room for mishaps in the new energy technology ecosystem.

Lack of knowledge about the technology, or the perception that it is difficult to build and operate, may deter investors from even considering making the investment. For example, if natural gas (which people are familiar with) is cheap, there will be less incentive to invest in a thermal energy storage system – even though gas produces more emissions. But with the wide variety of types and applications of underground thermal storage systems, there is definitely potential everywhere. 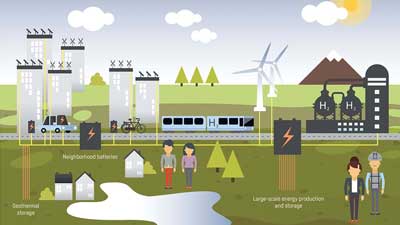 E-mobility is expanding, and we now see electric cars, bikes, scooters and kick bikes in the streets. Soon these may be joined by more fuel cell vehicles running on hydrogen. Utilisation of all of these vehicles will be extended beyond their intended use as means of transport to also include energy storage: they will charge when renewable energy is abundant in the system and feed energy back into micro-grid’s battery when needed. Such vehicle-to-grid and vehicle-to-building systems may become more common when regulatory barriers are lifted. With portable storage with safer solid-state batteries and hydrogen bottles, our phones will never again run out of batteries. The use of phase-change materials that store latent heat in self-warming clothes will also make it more comfortable to be outdoors in winter.

The future city is a storage city: a smart city where energy is needed on the go, a city where a large share of energy comes from renewable sources, a city where the internet-of-things allows communication between appliances and infrastructure. A future with battery-powered gadgets and vehicles, appliances, fuel cells and skyscrapers made of hydrogen-produced steel, thermal grids for heating entire neighborhoods and cooling supermarkets. What will it take to integrate these technologies and what might the future city look like? Discover more about future energy storage in the Urban Insight report Beyond the Tipping Point: Future Energy Storage.