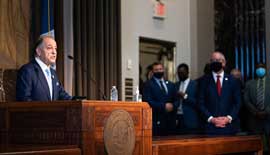 What is said to be Air Products’ largest-ever investment in the US, will see the company build, own and operate the blue hydrogen energy megaproject, which will produce over 750 million standard cu ft/day (MMSCFD) of blue hydrogen in Ascension Parish, Louisiana. “Blue” products are produced utilising hydrocarbons as a feedstock, with the carbon dioxide (CO2) in the production process captured for permanent sequestration.

A portion of the blue hydrogen will be compressed and supplied to customers by Air Products’ extensive US Gulf Coast hydrogen pipeline network. The network is the largest hydrogen pipeline system in the world, stretching more than 700-miles from Galveston Bay in Texas to New Orleans, Louisiana. Today, this vast US Gulf Coast pipeline network can supply customers with more than 1.6 billion cu ft of hydrogen/day from approximately 25 production facilities, including blue hydrogen from Air Products’ Port Arthur, Texas facility. The Port Arthur facility has captured approximately one million tons of CO2 annually since 2013, with the CO2 transported via pipeline and utilised for enhanced oil recovery operations.

The balance of the blue hydrogen from the new Ascension Parish facility will be used to make blue ammonia that will be transported around the world and converted back to blue hydrogen for transportation and other markets.

The innovative megaproject will also feature the world’s largest instance of CO2 capture for permanent sequestration and produce only environmentally friendly blue products. The megaproject is expected to be operational in 2026.

John Bel Edwards, Louisiana Governor said, “Carbon capture and sequestration are important to Louisiana’s efforts to reduce carbon dioxide emissions while maintaining jobs and growing our manufacturing base. This project is a clear demonstration of our ability to grow the Louisiana economy while lowering the carbon footprint of industry.”

Seifi Ghasemi, Air Products Chairman, President/CEO, said, “Air Products is fully invested in and committed to projects that leverage our build-own-operate, technology, financial, and sustainability capabilities, and this project brings all of those core strengths together. We are very excited about the model this project represents in the broader energy transition and thank the state of Louisiana for its collaboration on the pore space to safely and permanently sequester the captured CO2. We look forward to building on our long partnership with Louisiana and constructing a facility that will serve as a leading example of clean energy production around the globe.”

Approximately 95% of the CO2 generated at the facility will be captured, compressed and transported safely by pipeline to multiple inland sequestration sites located along a pipeline corridor extending up to 35 miles to the east of the new production facility. Over 5 million tonnes/year of CO2 will be permanently sequestered in geologic pore space secured from the State of Louisiana approximately one mile beneath the surface. Air Products has already received approval from the State Mineral and Energy Board, which is part of the Louisiana Department of Natural Resources, for the permanent sequestration of the CO2.

Air Products will provide all of the complex’s products ― blue hydrogen and co-products (liquid nitrogen, liquid oxygen and liquid argon) ― to customers in the US and around the world.