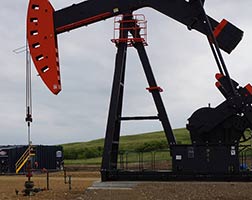 The latest fallout from the oil crash is here: American Eagle Energy has filed for Chapter 11 bankruptcy protection.

In March, the company missed its first interest payment of nearly US$10 million to bondholders, and entered a 30-day grace period. American Eagle hired financial advisers to negotiate with bondholders.

And according to the Wall Street Journal’s Patrick Fitzgerald, the company filed for bankruptcy protection in a Denver court, listing assets of US$221.9 million and debts of US$215.2 million.

In a quarterly filing last Friday, the company noted:

“The sharp decline in oil prices that occurred during the latter part of 2014, and the continued depressed pricing, has materially reduced the revenues that were generated from the sale of the Company’s oil and gas production volumes during that period, which, in turn, negatively affected the Company’s year-end working capital balance. The potential for future oil prices to remain at their current price levels for an extended period of time raises substantial doubt regarding the Company’s ability to continue as a going concern. For purposes of this discussion, the term “substantial doubt” refers to concerns that a company may not be able to meet its obligations when they come due.”

A Chapter 11 bankruptcy filing gives the company time to restructure its debt without completely stopping all operations.

The company had sold US$175 million of bonds last August, when West Texas Intermediate crude oil was priced near US$100 per barrel, according to Bloomberg.

But the tumble in the oil crash has punished oil companies that borrowed at the peak of the shale boom. In November, American Eagle Energy announced it would stop drilling oil until prices rebounded.