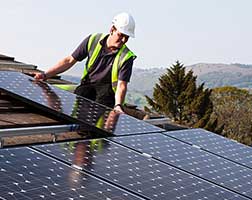 Anger has set in among renewable energy experts as the British government plans to slash home solar subsidies.

The potential reductions in the level of feed-in tariff (FIT), contained in a long-awaited consultation document released by the Department of Energy & Climate Change (Decc), and are far larger than expected.

The assault on solar power comes after ministerial decisions to remove financial aid from new onshore wind farms and slash home energy efficiency measures. There is even speculation that Decc could be wound up as a standalone department.

From 1 January, ministers are proposing reducing the feed-in tariff for smaller scale solar installations from 12.47p per kilowatt hour to 1.63p with large standalone units eligible for subsidies of 1.03p per kWh, compared with 4.28p today.

The government has blamed concerns that the £7.6bn budget for renewables will be drastically overspent, and argues that solar and onshore wind should be able to largely support themselves.

“We are taking urgent action to get a grip of this overspend and protect hardworking bill payers. Our support has driven down the cost of renewable energy significantly,” said a Decc spokeswoman. “As costs continue to fall and we move towards sustainable electricity investment, it becomes easier for parts of the renewables industry to survive without subsidies.”

But Decc documents include admissions that the proposed cuts in the solar tariff could lead to many fewer installations.

“There is a risk that these changes – combined with the separate consultation proposals to remove pre-accreditation – may result in significantly reduced rates of deployment,” it says in an impact assessment.

The Solar Trade Association reacted angrily to the move. “We regret that proposals to suddenly cut tariffs combined with the threat of closure of the scheme next January will spark a massive market rush,” said Mike Landy, its head of policy.

“This is the antithesis of a sensible policy for achieving better public value for money while safeguarding the British solar industry.”

Colin Calder, chief executive of a solar supply firm PassivSystems, put it more strongly, saying: “It is extremely disappointing to see the government once more targeting the rooftop solar PV [photovoltaics] market with tariff changes that are so extreme they will destroy an entire industry overnight, putting thousands of jobs and many businesses at risk.”

Juliet Davenport, chief executive of leading green power supplier Good Energy, hoped ministers would change their minds. “The feed-in tariff has transformed the way the UK generates its power over the last three years, with over 21% of the UK’s power coming from renewables in the early part of 2015, and over 700,000 homes generating their own power,” she said.

Environmental campaigners at Friends of the Earth said the move further undermined David Cameron’s credibility on tackling climate change in the runup to key talks in Paris later this year.

“These absurd solar cuts will send UK energy policy massively in the wrong direction and prevent almost a million homes, schools and hospitals from plugging in to clean, renewable energy,” said Alasdair Cameron at Friends of the Earth.

Samir Brikho, chief executive of engineering group Amec Foster Wheeler, warned that constant changes of policy were undermining confidence of the supply sector. “Uncertainty in the market is not helpful when you are trying to create a stable business,” he said.

But the government consultation, which is open to comments until 23 October, received support from the EEF manufacturers federation which has long expressed concern about high energy prices and the expense of aid going to renewable energy.

“With the costs of government energy policy surpassing previous projections and the … budget already looking like it’s been maxed out, government is right to be getting to grips with the issue,” said EEF’s Richard Warren.