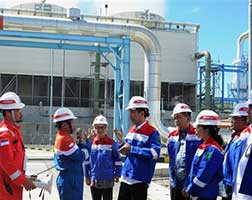 A new analysis by the Climate Policy Initiative (CPI) research has shown that Indonesia and the Philippines are lagging behind on harnessing geothermal energy.

US$133 billion needs to be invested by 2030 if developing nations are to carry out planned expansion of geothermal energy capacity.

Meeting the target to build 23GW of geothermal capacity over the next 15 years (one GW is enough energy to power 750,000 homes) would require a 7- to 10-fold increase in funding from governments and development financing bodies, the CPI said.

Public financing for geothermal projects should increase to between US$56 billion and US$73 billion by 2030 from US$7.4 billion today, the CPI said.

Considered an important alternative to fossil fuels, geothermal power can be accessed by building generating stations to harness the power of natural, underground heat.

“Geothermal has the potential to play a big role in a low-carbon energy transition,” Valerio Micale, a project manager with the Climate Policy Initiative, wrote in a briefing note on Aug. 26.

“While deployment of wind and solar has taken off in recent years, deployment of geothermal has remained steady but unspectacular.”

Geothermal is the cheapest power source in some developing countries with rapidly growing demand, and is economically competitive with other green sources, Micale wrote.

One reason why governments need to invest in the technology is that developers typically need to spend up to 40 % of a project’s costs before establishing if the project is feasible.

This has made private sector sources of financing reluctant to commit themselves, the CPI said, and it urged governments to help by financing initial feasibility studies for geothermal projects.

Turkey and Kenya were able to exceed analysts’ forecasts on geothermal production “through a combination of solid regulatory frameworks and significant development finance support”, the CPI said.