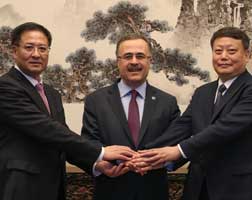 State-owned oil/gas giant Saudi Aramco is to form a joint venture with Chinese defence firm Norinco Group and Panjin Sincen to develop a fully integrated refining and petrochemical complex, located in the city of Panjin in the Liaoning province of China, in a deal worth US$10 billion, said to be the largest Sino-foreign jv. Aramco will hold 35% of the newly formed company, with Norinco and Panjin holding 36% and 29% respectively.

The partners will create a new company, Huajin Aramco Petrochemical Co. Ltd., as part of a project that will include a 300,000 barrel/day refinery with a 1.5 million tonnes/year ethylene cracker and a 1.3 million tonnes/year PX unit. Saudi Aramco will supply up to 70% of the crude feedstock for the complex, which is expected to start operations in 2024.

There are additional plans to establish a fuels retail business, which will further integrate into the value chain. By the end of 2019, a three-party marketing jv company is expected to be formed between Saudi Aramco, North Huajin and Liaoning Transportation Construction Investment Group Co., Ltd. to develop a retail fuel stations network in the target markets. 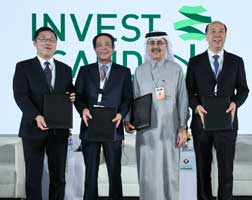 Meanwhile, Aramco also signed three MoUs aimed at expanding its downstream presence in the Zhejiang province, one of the most developed regions in China. The company aims to acquire a 9% stake in Zhejiang Petrochemical’s 800,000 barrels/day integrated refinery and petrochemical complex, located in the city of Zhoushan.

An integral part of the project includes a third agreement with Zhejiang Energy to invest in a retail fuel network. The companies plan to build a large scale retail network over the course of the next five years in the Zhejiang province. The retail business will be integrated with the Zhejiang Petrochemical complex as an outlet for the refined products produced.

CEO, Amin Nasser said: “The agreements demonstrate our commitment to the Chinese market and help enhance the strategic integration of our downstream network in Asia. They will further strengthen our relationship with China and the Zhejiang province, setting the stage for more cooperation in the future.”

The deals come against the back of controversial Saudi Crown Prince Mohammed bin Salman’s visit to China recently, on an Asian tour that has already seen the country pledge an investment of US$20 billion in Pakistan and seek to make additional investments in India’s refining industry.

Crown Prince Mohammed, who has come under fire in the West following the murder of Saudi journalist Jamal Khashoggi last year, said that Saudi Arabia saw great opportunities with China.

According to a report by Reuters, China has had to step carefully in relations with Riyadh, since Beijing also has close ties with Saudi Arabia’s regional foe, Iran.

It also said China is wary of criticism from Muslim countries about its so-called de-radicalisation camps in the predominantly Muslim region of Xinjiang in the west, which human rights groups call as internment camps.

The report also said that investments could help Saudi Arabia regain its place as the top oil exporter to China, a position Russia has held for the last three years.