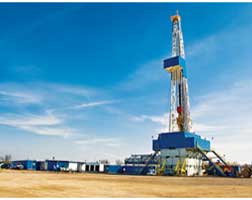 Shale oil engineer Oscar Portillo spends his days drilling as many as five wells at once – without ever setting foot on a rig.

Part of a team working to cut the cost of drilling a new shale well by a third, Portillo works from a Royal Dutch Shell Plc office in suburban Houston, his eyes darting among 13 monitors flashing data on speed, temperature and other metrics as he helps control rigs more than 500 miles (805 km) away in the Permian Basin, the largest U.S. oilfield.

For the last decade, smaller oil companies have led the way in shale technology, slashing costs by as much as half with breakthroughs such as horizontal drilling and hydraulic fracking that turned the United States into the world’s fastest-growing energy exporter.

Now, oil majors that were slow to seize on shale are seeking further efficiencies by adapting technologies for highly automated offshore operations to shale and pursuing advances in digitalization that have reshaped industries from auto manufacturing to retail.

If they are successful, the U.S. oil industry’s ability to bring more wells to production at lower cost could amp up future output and company profits. The firms could also frustrate the ongoing effort by The Organization of Petroleum Exporting Countries (OPEC) effort to drain a global oil glut.

The technological push comes amid worries that U.S. shale gains are slowing as investors press for higher financial returns. Many investors want producers to restrain spending and focus on generating higher returns, not volume, prompting some to pull back on drilling.

Production at a majority of publicly traded shale producers rose just 1.3 % over the first three quarters this year, according to Morgan Stanley.

But many U.S. shale producers vowed during third quarter earnings disclosures to deliver higher returns through technology, with many forecasting aggressive output hikes into 2018.

“The people that don’t have shale in their portfolios don’t understand it, frankly,” Lance said in an interview. “They think it’s going to go away quickly because of the high [production] decline rates, or that the resource is not nearly that substantial. They’re wrong on both counts.”

Shell, in an initiative called “iShale,” has marshalled technology from a dozen oilfield suppliers, including devices from subsea specialist TechnipFMC Plc that separate fracking sand from oil and well-control software from Emerson Electric Co to bring more automation and data analysis to shale operations.

One idea borrowed from deepwater projects is using sensors to automatically adjust well flows and control separators that divvy natural gas, oil and water. Today, these subsea systems are expensive because they are built to operate at the extreme pressures and temperatures found miles under the ocean’s surface.

Shell’s initiative aims to create cheaper versions for onshore production by incorporating low-cost sensors similar to those in Apple Inc’sWatch, eliminating the need for workers to visit thousands of shale drilling rigs to read gauges and manually adjust valves. Shell envisions shale wells that predict when parts are near mechanical failure and schedule repairs automatically.

By next year, the producer wants to begin remote fracking of wells, putting workers in one place to oversee several projects. It also would add solar panels and more powerful batteries to well sites to reduce electricity and diesel costs.

Oil firms currently spend about US$5.9 million to drill a new shale well, according to consultancy Rystad Energy. Shell expects to chop that cost to less than US$4 million apiece by the end of the decade.

Much of the new technology is focused on where rather than how to drill.

“There is no amount of technology that can improve bad geology,” said Mark Papa, CEO of shale producer Centennial Resource Development Inc

“It’s not only removing costs that are superfluous,” he said. “It’s boosting production.”