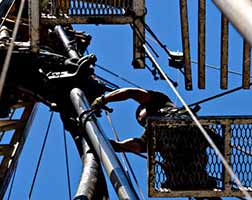 Oil prices are moving up, extending a recent rally and providing support to regional energy stocks, while Wall Street provided a strong lead despite a weak manufacturing reading.

The euro held its own in early trade as investors keep tabs on a tour of Europe by Greece’s new leaders aimed at ramping up support for a renegotiation of its massive bailout.

Crude enjoyed some much-needed buying after data showed the recent slump in prices has led to a decline in the number of rigs drilling.

The increases will come as welcome relief for markets after the black gold slumped more than 50% from its June 2014 peak owing to a global glut and a strong dollar.

Energy firms were the main winners from the uptrend. Hong Kong-listed Sinopec added 1.65% and CNOOC gained 3.5%, while in Sydney Woodside added 2.35% and Santos surged 3.75%. Inpex in Tokyo was 5.26% higher.

“The rise in prices has helped doubts about the global economic slowdown recede, and eased worry over default risk and downgrade risks for both countries and companies.”

However, Seoul dipped 0.55%, while Tokyo eased 0.10% as the yen strengthened against the dollar.

The crude rally also lent support to Wall Street, where investors were able to brush off data indicating the US manufacturing sector slowed in January. While shares rose, there are fears that weakness in China, Japan and Europe is acting as a weight on the US economy, which also saw a sharp slowdown in growth at the end of last year.

Greece’s new far-left government is looking for support from European governments and investors in its bid to renegotiate its EUR240-billion bailout.

Prime Minister Alexis Tsipras visited Cyprus in his first foreign trip since his Syriza party swept to power last month, while Finance Minister Yanis Varoufakis was in London as part of a diplomatic drive.

After meeting Varoufakis in London, his British counterpart George Osborne warned: “It’s clear that the standoff between Greece and the Eurozone is fast becoming the biggest risk to the global economy.”

In other currency trade the dollar was at 117.29 yen, compared with 117.64 yen in New York Monday afternoon.