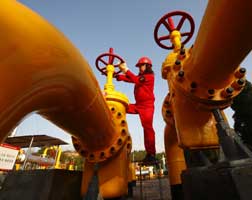 Asian stocks declined the most in three weeks after the Federal Reserve cited global risks to the US economy and as oil slumped below US$45 per barrel. China shares fell on speculation of increased scrutiny of margin trading.

The MSCI Asia Pacific Index lost 1.1% to 140.79 as of 4:05 p.m. in Hong Kong. The Fed in a statement Wednesday said it will take into account “international developments” when deciding on when to raise interest rates from near zero, while at the same time boosting its assessment of the US economy. The nation’s oil supplies climbed to their highest in data going back more than 30 years, exacerbating concerns over a global supply glut.

“The market was hoping for a little bit more dovish statement,” said Nader Naeimi, head of dynamic asset allocation at AMP Capital Investors in Sydney. “The first move is going to get the market unnerved, especially in a world where there is global divergence.”

The Shanghai Composite declined 1.3% on a report Chinese regulators plan to start a new round of checks on the margin lending businesses of brokerages as soon as this week, the Xinhua News Agency reported Wednesday night. The Hang Seng Index slid 1.1%.

New Zealand’s NZX 50 Index fell 0.6%. The country’s central bank shifted to a neutral stance on interest rates and hinted it is prepared to lower them as plunging oil prices damp inflation globally.

The Fed said it’s confronting divergent economic forces as it weighs the timing of the first US rate increase since 2006, according to a statement Wednesday. Surprisingly strong job gains argue for tightening sooner, while inflation held down by a plunge in oil prices and a cooling global economy provides grounds for delay.

Futures on the Standard & Poor’s 500 Index gained 0.3%. The underlying equity gauge slipped 1.4%, with the selloff deepening during the final 1 1/2 hours of trading. McDonald’s Corp., the world’s largest restaurant chain, rose in extended trading after replacing its chief executive officer.