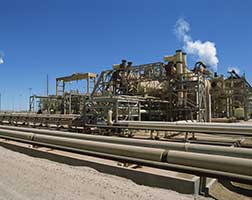 Asian demand will drive natural gas’s share of global energy supplies ahead over the next 15 years despite stalling consumption in Europe, while oil and coal will lose some global share to renewables and nuclear power, Russia’s Gazprom said.

The state-controlled company said the falls in oil and coal demand would flow mainly from rising renewable and nuclear power generation as well as improving energy efficiency.

Gazprom, the world’s biggest exporter of natural gas, said it expected the global share of natural gas to remain stable around 23% to 24% in the next 15 years, supported largely by rising demand in Asia.

“Gazprom is keen to play a bigger role in Asia,” Dmitry Lyugai, Member of the Management Committee and Head of the Prospective Development Department, told a webcast briefing.

Gazprom said that Asia’s share of global gas demand would rise from 20 to 25% by 2030, driven mainly by growth in the shipped liquefied natural gas (LNG) sector.

Gazprom is traditionally focussed on pipeline supplies, largely to Europe, although it signed framework agreements with China last year to pump gas there in the future in order to diversify its customer base away from Europe, where demand is stagnating and political tensions are high.

Gazprom’s LNG sector is relatively small, making up just 5% of global annual volumes of 302 million tonnes, Lyugai said, but added that the firm planned to expand the business through its huge Arctic Yamal project as well as its Sakhalin projects on its east Asian coast.

The International Energy Agency (IEA) said last month that coal “is on track to catch oil as the number one energy source.”

Oil major ExxonMobil said in its 2040 outlook last December that coal’s share of energy use would shrink from 25% in 2010 to under 20% in 2040 as China follows North America and Europe in shifting towards cleaner fuels.