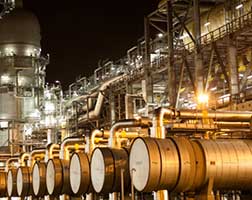 Also, download this story from the electronic issue here

The petrochemicals sector, a significant contributor to the Asian economy, is overriding challenges against the back of a steady demand, says Angelica Buan.

The lingering low price of oil bodes well for petrochemicals demand, according to experts. And it will take a while, or maybe never, for oil prices to revert to the US$100/barrel base target.

Citing the World Bank (WB) report on global economic prospects, the oil prices are projected to remain low this year, and could rise slightly next year. The price slump was drastic in the second half of 2014, yet it translated to more brisk demand for petrochemical products. For example, the low oil price has seen a reduction in the cost of naphtha – a feedstock needed by the plastics industry.

IHS Chemical also pointed out that lower oil price is resulting in lower chemical product prices, being that oil sets the production cost and price for many chemicals, plastics and synthetic fibres.

A report from Transparency Market Research (TMR) has reiterated this demand hike for petrochemicals in major end-use industries, including construction, plastics, textiles and healthcare. The increase in demand is projected through 2030, amidst the favourable operating conditions in regions such as the Middle East and Asia.

While oil price cuts are a welcome respite for the plastics industry that has survived the impact of global economic crisis, the price volatility of natural gas has an inimical bearing on the petrochemicals market. Nevertheless, analysis for the sector indicates that market revenue will continue to kick in, as it is forecast to reach more or less US$800 billion in 2018, according to TMR and BMI Research in their respective reports.

China remains the largest petrochemical market in Asia, and the third largest globally. It accounts for 25% of the global consumption, despite the growth slowdown. India follows China in terms of demand volume.

As a whole, the Asia Pacific (APAC) region represents approximately half the global consumption volume, according to BMI Research.

An earlier study by Japan’s ministry of economy, trade and industry, noted that new facilities are coming up in China and India, as well as in the Middle East.

The Dutch consultancy group, KPMG, has estimated China’s growth rates to be around 10% yearly for the last ten years, owing to the demand for Chinese manufactured goods. It is also for this reason that key customers of the chemical industry have shifted their manufacturing and production to China.

However, industry players are observing slower increase of petrochemical product imports by the country.

At the recent Asia Petrochemical Industry Conference (APIC) held in May in South Korea, the delegates discussed how China’s imports of major petrochemical products, such as PP, remains either slow or flat amidst the high requirement in China for such products.

Meanwhile, Managing Consultant Mazlan Razak of Thailand-based energy consultancy firm, Nexant, in his presentation during the Chemorbis Asia Petrochemicals Conference held in June in Kuala Lumpur, said that China will continue to rely on imports to meet its PE and PP demand. But it is only a matter of time that the country achieves self-sufficiency, particularly in these materials, and as a result could soon be exporting to other Asian countries.

Slow but steady growth is how the American Chemical Council (ACC) describes the developments in China’s chemical industry. In another report, ACC cited that this year, China’s chemical production increase will be a little off at 8.5% against the 8.8% in 2014.

More at stake for India

India, another Asian forerunner in the petrochemicals market demonstrates vigorous growth that is faster than the global growth rate of 6%, according to a study by the Associated Chambers of Commerce of India (ASSOCHAM). It revealed in its study on the Indian petrochemical industry that a likely turnover of US$100 billion is expected for the domestic sector by 2020. Petrochemicals account for 30% of India’s US$120 billion chemical industry, and comprise olefins, ethane, propane, aromatic compounds, synthetic fibres, rubber, and polymers.

About 6.2 million tonnes of polymers are being consumed by India, according to ASSOCHAM. Furthermore the local petrochemical industry will be benefitting from over US$25 billion worth of investments due to the increasing demand.

This year holds bright prospects for the sector with investment offers coming from the likes of oil and gas giant Royal Dutch Shell, which is planning to expand its retail outlet network in the country with some 2,000 fuel stations in addition to its currently operational 75 stations, utilising its existing marketing licence, according to reports.

The Netherlands-based firm supplies crude products, chemicals to oil firms and has interests in lubricants and bitumen businesses. It is also setting up an information technology centre in Bangalore. The investment is spread out in phases, with the first phase to be completed by March 2016, adding on about 25,000 tonnes/year to the production. The remaining phases, commissioned every 12 months, will each add 25,000 tonnes/year.

Manali projects that the additional capacities will produce cost-effective propylene oxide (PO) in manufacturing products like glycol and PU foams used in automotive, construction, and other industrial products.

China’s new normal growth pace and economic rebalancing are setbacks for global industries, especially those that lever on exports to China. Despite this, the rest of APAC’s growth remains steady, according to the 2014 global chemicals industry review of Standard & Poor’s.

However, chemicals supply in the region is another story. S&P noted that the APAC region’s chemical supply is short. From 2013 to the first quarter of 2014, the sector’s performance has not been impressive, particularly in the segments of refinery, polyester chain, and agro-chemicals, with challenging statuses for the olefins/polyolefins and mining segments. For the succeeding 12 months from the forecast period, improvements were attributed to the refinery, olefins/ polyolefin and agro-chemicals segments.

Malaysia, based on data from the Malaysia Petrochemicals Association (MPA), has gained from its strong exports to China, as well to other Asian countries, since its polyolefin industry depends on exports. But now the country has to strategise to compensate for the slowdown in China. Also, it has been bogged down by the weakened ringgit, which recently slipped to a nine-year low against the US$. The shaky currency situation encumbers the purchasing power of domestic chemical players. Nonetheless, its petrochemicals sector remains robust with new developments, including the newly launched U$565 million thiochemicals plant of French chemicals firm, Arkema and South Korea’s CJ CheilJedang.

Recently, German chemicals firm BASF and Malaysia’s state-owned oil company Petronas’s subsidiary Petronas Chemicals Group (PCG) broke ground at the BASF Petronas Chemicals site in Kuantan for a 2-Ethylhexanoic Acid (2-EHAcid) plant, which is expected to churn out a capacity of 30,000 tonnes/year, when it comes on stream by 2016.

Petronas also has a 300,000 barrels/day petrochemicals refinery and the 7.7 million tonnes/year petrochemicals integrated development (RAPID) steam cracker project in Johor, to produce speciality chemical products such as synthetic rubbers and polymers. Its subsidiary, PRPC Refinery and Cracker, and Japanese construction firm Toyo Engineering Corporation have embarked on a large-scale ethylene steam cracker Complex (SCC) project, which will be part of the RAPID, to be completed by mid-2019.

Thailand’s petrochemical sector is also looking to brighter prospects. According to reports, PTT Global Chemical (PTTGC) is investing US$200 million for a new metallocene linear low density polyethylene (MLLDPE) plant at Map Ta Phut. The plant, which is expected to commence construction middle of this year and start operation by 2018, will have a capacity of 300,000 to 400,000 tonnes/year.

In Indonesia, a refinery and petrochemical complex will also be constructed in the Riau province, with the ground breaking scheduled in 2016. The US$7 billion investment is initiated by Oman. State-owned oil company Pertamina will be buying the oil products.

Vietnam is also targeted for a 200,000 barrels/ day refinery project. Japan’s JX Nippon Oil & Energy is undertaking a feasibility study for a joint venture refinery project in Khanh Hoa province, Vietnam, by mid-2016. The study follows the MOU signed late last year between JX Nippon and state-owned Vietnam National Petroleum Group (Petrolimex) for the construction of the refinery to be sited within the planned Nam Van Phong Petrochemical Refinery Complex. Depending on the outcome of the study, the plant could come on stream by 2024, said JX Nippon.

The Japanese firm is also upgrading its Balikpapan refinery in East Kalimantan in Indonesia. With an MOU signed with Pertamina, JX Nippon is looking at increasing its capacity from 250,000 to 360,000 barrels/ day.

Heavier crude feedstocks from the Middle East will be used by Pertamina, instead of the low sulphur crude sourced from Indonesia or Australia.

In the Philippines, the automotive and construction sectors are poised for strong growth, prompting petrochemicals manufacturers to ramp up capacities.

According to a latest BMI Research report, the country’s petrochemical industry dealt with poor performance in 2014. This year, however, a rebound is taking place as economic conditions improve and capacities increase starting from PP and PE producer JG Summit Petrochemicals Corporation (JGSPC) bolstering capacity utilisation at its new cracker complex. The additional capacity is expected to augment the country’s petrochemicals supply.

Business Monitor International reported that import of petrochemicals is a major factor for the development of the local industry, complementing planned expansions of domestic petrochemical operations.

Ira S Kiener, CEO of Knottical Power, told PRA in an email interview that the Philippines as a market base is “ripe”. He explained, “Demand for products requiring polyethylene and elastomers will show a positive relation with disposable income and GDP growth rates.”

The country’s GDP grew by 5.2% in the first quarter of the current year, according to the National Statistical Coordination Board (NSCB) data.

The firm, which operates in the Philippines is tapping into the other markets by “starting to initiate steps to begin selling products in the US and in the ASEAN region, mainly in anticipation of the ASEAN integration.”

According to Kiener, the sectors that are pushing the demand for petrochemicals include plastics, intermediates, styrenics, and elastomers for the automotive, tyre, footwear, mechanical goods, sheeting, flooring, adhesives and extruded goods.

Although the country’s petrochemical market evidences huge growth potential, the aspect for production competitiveness seems to be its Achilles’s heel.

Knottical Power, which caters to the aerospace, marine, transportation, construction and power generation segments, does not see itself setting up production in the country, as yet.

“Our level of technological advancement and sophistication just cannot compete with the status quo. (But) that could change very fast, though, if investments are made into both technology and human capital,” said Kiener.

So what will it take for the country to become fully competent in this segment?

“I would say investments in technology to allow for more efficient domestic production and investment in human capital to innovate novel ways to produce finished products from raw material in the most efficient way possible so as to be able to compete in the global arena,” he said.

Hence, the rise in disposable incomes and GDP rates will be a major factor to the build up of further chemical complexes in the region, to cater to manufacturing of plastic products.