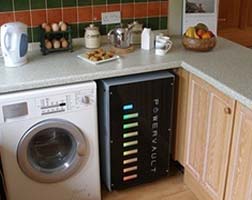 When Elon Musk, the chief executive of Tesla, took to the stage in California in April to launch a solar battery for the home, the audience hollered and whooped at every detail. On the other side of the Atlantic, a more modest, quieter challenger plans to take on the US electric car giant.

Based within a railway arch, with the sound of trains running overhead from nearby London Bridge station and surrounded by other ecologically minded startups, the offices of Powervault are a far cry from Tesla’s showpiece Californian stage. The similarity lies in the product – the Powervault battery, which stores energy from domestic solar panels.

Home energy generation has blossomed in the UK over the past four years, with an estimated 650,000 homes fitted with solar panels. In 2010, the government introduced the feed-in tariff scheme to pay householders who produce and supply energy. The scheme aims to push renewable energy in the UK towards 15% of total energy by 2020. In 2009, the figure stood at 2%.

Powervault, Tesla and other players in the emerging solar battery market aim to supply the means for householders to store energy produced during the sunniest part of the day for use at peak times, when more people are at home but the sun is down.

“A lot of people are not at home during the day, they are at work,” Warren says. “The solar system is generating energy which is all exported. We thought, ‘Wouldn’t it be great if you could store that energy and use it when you are at home in the evening?’ Our system stores energy during the day when it is sunny and then gives it back to the customer in the evening.”

The Powervault unit is about the size of a washing machine and weighs about 150kg (330lbs). Inside are batteries, chargers and electronics. A charger takes the energy from the solar panels and transforms it into energy which is then stored in the batteries and discharged around the home when needed.

“Typically the system works on a daily cycle so it charges up when it is sunny and then on that same day discharges,” Warren says. “It would typically store the energy for less than 24 hours.

“It has a control system and a monitoring system which works out whether you are importing or exporting [electricity]. If you are exporting, it will charge the batteries until they are full and if it notices that you are importing electricity, it will start to discharge energy and reduce the amount of energy being imported from the grid by offsetting that with the energy in the battery.”

The unit stores 2 to 4 kilowatt hours, enough energy to watch television for 14 or 28 hours or wash two to four full loads in the washing machine. Priced between £2,000 and £2,800 per unit, it is cheaper than rivals, says Warren, and it has been reduced in size to tailor it for the British home’s energy needs.

“The main purpose is to reduce people’s electricity bills, to charge up during the day when it’s sunny, discharge it in the evening when people are using power. If you made the battery bigger, you could store the energy for longer but the problem with that is it would cost a lot more. What we have tried to do is size the unit so it is just right for a British house.”

Savings from the device depend on consumption, the number of solar panels installed and how much energy they produce, although the company estimates that it could lower electricity bills by up to 15%.

Warren said sales started in September, with devices snapped up by early adopters and people enthusiastic about green technology. Powervault is aiming to cut the cost to £1,000, making the savings on evolving battery technology and economies of scale. Warren says some estimates put the number of households with solar panels at 2m by 2020, by which time the company hopes to have sold 50,000 units. 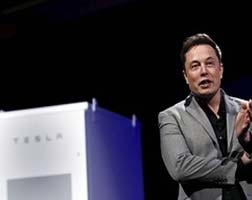 Elon Musk, of Tesla, at a glitzy launch to unveil the Powerwall home battery in April. Photograph: Patrick T Fallon/Reuters

However, competition is expected to be harsh. Tesla’s wall-mounted Powerwall batteries are designed to store up to 10kW hours of wind or solar energy; units have sold out until mid-2016. It aims to have its batteries in the UK by the end of this year. Last month, Mercedes-Benz also entered the battery market for home and business use.

Eco-entrepreneur Dale Vince, chair of the renewable energy firm Ecotricity, said the home battery market remained undeveloped until now because energy had been “too cheap for too long for it to matter”. Ecotricity is also developing a product – expected to be launched next year – with a working title of “black box”, a 2ft to 3ft-high device that will control power coming in and out of the home.

Energy storage has been described as the missing link of solar energy adoption. A report from Deutsche Bank this year said solar energy storage would be cheap enough to be deployed on a large scale within five years as a result of a yearly cost reduction of 20% to 30% in the price of lithium-ion batteries. – The Guardian